1 Fancy the New Tesla Roadster? Learn How to Clear the Biggest Hurdle: the Wife

2 The Tesla Roadster II Feels like an Extreme Amusement Ride

Home > News > Car Profile
Vlad Mitrache
Of course, the sub-two seconds zero to sixty time and the sub-nine seconds quarter mile sprint were the things most people took away from the Tesla Roadster preview, along with the impressive range of 620 miles (1,000 km), but there was something else as well there.
1 photo
One of the reasons the original Tesla Roadster was basically just a demo car, a vehicle meant to show the world what the company can do using an electric powertrain, was its almost complete lack of practicality. Basing it on the Lotus Elise helped reduce costs (as well as provide a tried and tested chassis), but it also offered very limited possibilities of making the Roadster anything other than a fun ride.

It might have been decent compared to the Elise or other cars of this type, but it was still far from what most people require from their daily driver. But with the new Roadster, Elon Musk promised a two-plus-two seating arrangement as well as ample luggage space.

He said you could fit two giants in the rear seats if they didn't mind getting squashed a little and was even more abstract about the trunk size skipping the metaphors altogether. That being said, the people present at the event got to touch the car and open its rear hatch, so they know what was hiding behind those tinted windows. Well, at least those that were lucky enough to get through the mob and reach the sports car.

One such video comes from Bjørn Nyland, the Norwegian Model X owner who vlogs about Tesla on his YouTube channel. He managed to get behind the Roadster with just one layer of people separating him from car and successfully captured a few seconds of footage while the rear hatch was open.

The heads of the other attendants who flocked there - particularly that of Brooks from Drag Times, whose video should be even more revealing - prevent us from getting a clean look, but there just doesn't seem to be enough room for two seats back there, no matter how squashed those giants might sit in them.

That being said, we're not suggesting Elon is lying. We're sure the Roadster has four seats, we're just very curious to see the solution Tesla's designers found. They could have been folded in some way here, which would explain why we couldn't see them, but that's speculative.

Whatever the case, we doubt the Roadster will be the ideal choice for four people going on a road trip. You might get there fast and without stopping for a charge, but two of the passengers might have the shape of those elusive seats imprinted in their spines forever. 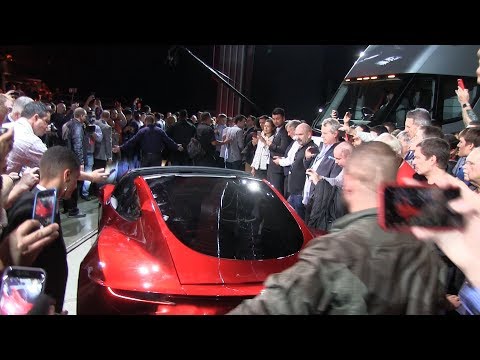