The hottest Mustang for 2021 isn’t the Shelby anymore, according to the Blue Oval. Instead, it’s the revived Mach 1, something that came along to bridge the gap between the standard GT and the GT500 as the Bullitt and GT350 are no more. So, everyone knows there’s some big shoes to fill.
30 photos

You might think that seeing a car review means you’ve seen them all. After all, let’s take the 2021 Ford Mustang Mach 1 for example. Because it’s something like a Shelby GT350 and Bullitt variants tossed “into a blender” for some much-needed track fun and the ability to also use it as a daily driver, it’s probably mandatory to see how it fares on a racetrack, rather than the street.

And we’ve already encountered it both at Willow Springs and even in remote Australia, so we know we’ve journeyed across the world with it, at least online. But here’s the thing, every human being is unique and as such no one should be surprised this can also be applied to their car reviews.

So, here comes Edmunds’ host Carlos Lago to put that into perspective as he decidedly gives a personal swing to the test procedure. All in all, we first expected to see everything neatly arranged in the traditional manner – judging by the title, description, and the chapter time stamps of the video embedded below.

But just hearing the Mustang Mach 1 roar on the Big Willow was just part of the fun, because one other highlight is the presenter himself. He’s doing a one-man show, so in the span of just eleven minutes we also found out he likes to kiss the 19-inch wheels of the ‘Stang (2:08 mark), give a “tragic loss” flower-infused eulogy to the GT350 (3:08) because it was “too high-revving for this world,” and even play with some of the parts Ford has optionally used on this occasion (3:45).

Don’t worry, he also drives around Big Willow in the 2021 Ford Mustang Mach 1... it’s just that we’re not treated to any of the shenanigans we would have expected: drifts, starting line burnouts, or at least a chase or two. Yes, that’s the pitfall of having an entire track all four yourself! 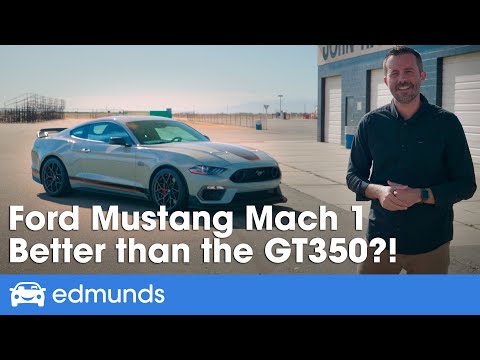