2 After Eating Tide Pods, People Are Now Spray-Painting the Brake Discs on Their Cars

4 You’re Too Drunk When You Start Kicking, Jumping on Supercars, Go Home

Social media has changed a lot of things about how we present ourselves and relate to others. It also changed the way we do business and invented a whole new career for those for whom image and self-promotion are everything.
7 photos

At the same time, because of all this, social media has given rise to the so-called trend of clout-seeking, to which you can attribute the stupidest online stunts and challenges you can think of. Put it less elegantly, some people are striving to be as outrageous or scandalous as possible, just so they can get attention. Whether that involves eating Tide pods or jumping off buildings is entirely up to whoever wants the attention – and how badly they want it.

You know it’s difficult to make a splash on social media when you have an entire fleet of supercars and you still have to resort to clout-seeking. Yet it happens, and it’s not rare. Just last year, the richest social media star in the United Arab Emirates, Humaid Albuqaish, made headlines for his habit of letting his pet bear cub into his expensive cars, after a video of the animal tearing off the door of his Lamborghini Huracan Performante went viral.

The latest viral video also has to do with super expensive cars and their doors, but at least there’s no animal involved. Available at the bottom of the page is a video of a man apparently clinging on for dear life to the door of his Bugatti Chiron, lest he falls in the water. It wouldn’t be a huge or life-threatening drop, but maybe he’s terrified of water.

You know how appearances can be deceiving. As CarScoops notes, the whole thing is fake; that much you must’ve guessed from the overly-dramatic way in which he pretends to lose his grip and then slowly crawls to solid ground again. That man is entrepreneur, exotic car dealership owner, and the self-professed “King of Cars in Germany” Christoph Zitzmann, who has a thing for hanging off car doors over bodies of water.

In between photos of his model girlfriend, jaw-dropping posts about his personal cars, or the glamorous places he goes to, he flexes hard on social media. Zitzmann calls it the #ZitzmannLifestyle, and it also involves doing pull-ups on the doors of his cars, specifically the Chiron and a Rolls-Royce Phantom Drophead. When he’s not doing his arms days on his car doors, he likes to sit on them for photos.

This would have been less controversial if it involved an econobox or even an average-priced vehicle. But Zitzmann’s obvious disregard for the integrity of highly valued supercars is rubbing people the wrong way, and many of them are letting him know it. Just don’t count on him losing sleep over it. 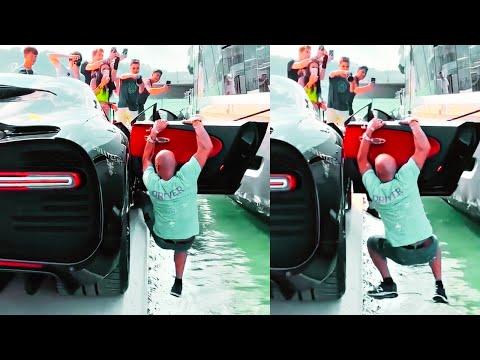