Bugatti produced its last race car in 1955 and competed in the French Grand Prix but without a noticeable result.

But it made a point: the French brand was still perfectly capable of producing high-performance cars.

In 1955, the French carmaker was in a bad financial situation and threw everything into the Type 251 race car. Bugatti hoped that the results would attract more customers and revive the once glorious brand. Unfortunately, the odds were different, and the 251 failed to finish the Grand Prix, retiring in the 18th lap. Nevertheless, it was an unusual, stunning design, but it wasn't complete.

Sporting a wide, squared bodywork, the Type 251 revealed a form of an aerodynamic-shaped front end, partly covering the front side of the wheels. A broad air intake ensured the cooling of the radiator placed behind. But the engine was not in the front but behind the cabin.

The cabin was fit for the driver and featured a padded seat and even a headrest. The specific, four-spoke Bugatti steering wheel sported the EB badge in the center. In front of the driver, Bugatti placed the tachometer while the speedometer was on the left.

But the masterpiece was behind the driver. The inline-eight engine was mounted transversely and featured two spark plugs per cylinder. It was fed by four double-choke Weber carburetors. The exhausts were grouped by four and exited behind the car, on the sides. Strangely, though, Bugatti chose to use a De Dion rear axle, while other carmakers had already switched to independent systems in all corners. That led to a disadvantage for the Type 251, especially in the high-speed cornering situation. Bugatti had already built two prototypes of the new race car and promised that the factory would provide another eight units within months, but that never happened. 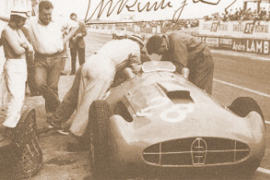 1 An Original Type 35 Bugatti is a Seven Figure Antique, This Replica is 1/250th the Price