1 Ferrari SF90 Stradale Crashes Into 5 Parked Cars, Is Abandoned at the Scene

2 Men Try to Tow House to New Destination, Leave Trail of Destruction and the House Behind

3 Bachelor Party Ends With One Barge Underwater, Another Crashed, and a Third on the Run

You’re Too Drunk When You Start Kicking, Jumping on Supercars, Go Home

It’s all fun and games until someone else’s property gets damaged. One man went out partying on May 21 and kept the partying going even after it took a turn for the worse, causing $150,000 worth of damages to a bunch of innocent parked luxury cars.
7 photos

That man goes by Gao in Chinese media and has gone down in Internet history as the latest and most unlikely viral sensation. He is 24, but seems considerably far younger than his age, because he acted out on his drunken rage by causing serious damage to four, very expensive rides parked in the reserved lot of a luxury hotel in Chengdu, China, in the Sichuan province.

Video of his rampage has been released to the media after the incident and went viral right away. You can see it below.

According to South China Morning Post, the man was out drinking with friends, including the woman seen below, desperately trying to prevent him from causing more damage. He flew into a rage and started kicking and jumping on four cars, causing “considerable” damage to a Lamborghini and a pair of Rolls-Royces. In total, he is on the hook for $150,000 in repairs. We’ve all done stupid stuff when we were drunk (*allegedly), but this is far too expensive for a night of painting the town red.

Somehow hilariously, reports indicate that Gao was able to leave the property after he was all drained out and had cooled off. Hotel staff was only alerted in the morning, when the cars’ owners came out to a very unexpected scene. Staff pulled the CCTV footage and were thus able to determine what had happened. The man turned himself the next day – in what is probably the worst case of hangover in years.

Gao has been charged with criminal vandalism and will probably have to foot the bill for the repairs. Drunken regret is this 24-year-old with little sense – and less money soon. 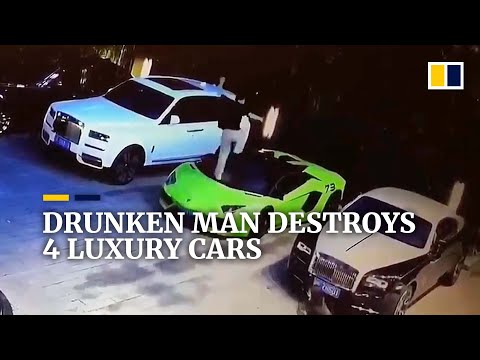