The 101 was the last Bugatti built by the Bugatti family.

It was the last struggle to revive the famous brand. Unfortunately, the car was not the resurrection needed by the French luxury brand.

After WWII, the Bugatti car manufacturer was struggling to survive. There was no money on the market for luxurious cars. Ettore Bugatti died in 1947, leaving his second son, Roland, in charge of the company. He tried to build a new vehicle based on the Type 57 chassis. It was the 101, the car that should restart the company.

There were only six vehicles built, and not all of them were convertible. The Type 57 featured a long wheelbase, too big for a regular convertible, but Roland didn't have the money to develop a new chassis. The designer hid that long wheelbase with the addition of a few vents on the front fenders and the bi-color bodywork paint. Its rounded forms and ponton-like panels made the car look shorter than it actually was. The canvas top was cheaper to build than a hardtop.

The interior featured a dash panel with a few round dials and piano-black finishing. An unusual feature for those times was the steering-column mounted gearshift lever. It was an electrical selector that changed the gears with two fingers, but the clutch had to be used. There were only four convertibles built, three of them by Gangloff and one by Virgil Exner/Ghia. The latter featured a shortened chassis.

The Type 101 featured an inline-eight engine with a total displacement of 3.3-liter. It was available with or without a supercharger. The engine was an improved version from the Type 57, with a down-draught carburetor system instead of the horizontal, Stromberg ones. 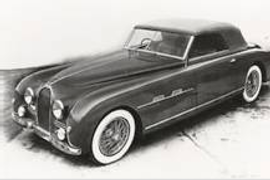