Cyber Rodeo: Tesla Is Getting Better at Organizing Events, Making Cars Next?

Vlad Mitrache
Have you noticed how people - particularly Tesla die-hards - have started calling "cyber" everything triangular? I find it amusing and annoying in equal parts - amusing because it makes it seem as though these people think Elon Musk has just discovered a new geometrical shape (or at least rebranded it) and annoying - well, for the very same reason.
19 photos

But that's how people who are way more enamored with Elon Musk than anyone should ever be with anyone other than their spouse tend to act. These are the people you'll see crying and unable to hold their emotions when Elon shows up on stage in the clip below - was I the only one to get some serious Michael Jackson flashbacks? I don't know, if I were booked by a car company to be the event's live transmission director, I wouldn't have included it in the feed (or the final cut). But since this is Tesla, building up Musk's personality is even more important than building cars, so the rock concert-like reactions from the people in the public were probably considered a welcome addition.

The company knows very well its success depends on sustaining this personality cult around its CEO, and the Cyber Rodeo presentation definitely played its part in it. Look no further than the shamelessly grandiose portrait that was part of the drone show - something that would make most normal people raise an eyebrow, if not throw up altogether. It would have seemed appropriate if Kim Jong-un did it, and that's not the kind of people you'd like to see your name associated with.

Was the opening show impressive? I'm sure it took the team a lot of work hours to get the choreography right but, at the end of the day, it's all nothing more than programming. Drones in the night sky are basically moving pixels, with the added benefit (or complication, depending on how you look at it) of having one additional axis of movement. Remember when it used to be all about projection mapping on buildings? You should, it was only a few short years ago. Well, technology is moving quickly, so now it's all about 3D drone shows, apparently. Though, if you ask me, this footage recorded for Porsche by drone pilot Johnny FPV is a million times more worthy of praise because it involves some actual human talent and not a bunch of machines executing a preset choreography.

The short clip of the Model Ys driving through the prairie next to an all-black cowboy who, I have to admit, I was very pleasantly surprised to see was not Elon Musk, made very little sense and felt out of place. Come to think of it, maybe having Musk on the horse wouldn't have been the worst idea. At least his almost guaranteed clumsiness would have made it funny. As it stood, it just felt like a cliche way of saying "hey, we're Tesla and we're in Texas, in case you missed it."

One secret to making the shows better is shortening Musk's speech, and the CEO only spoke for 15 minutes - though it definitely felt like more than that. Also, the time could have been halved if it weren't for Elon's awkward pauses and the even more awkward laughter. Also, his engagements with the audience might be great for the few people who get a direct answer from him, but for the rest of us who simply hear a random answer from Musk and no context, it's a waste of time.

It feels as though Tesla is evolving both thanks to and despite Elon Musk - it's a weird paradox, but then again so is Musk. With the cowboy hat and those shades, he very much felt like a cartoon character. And yet this guy is also the world's wealthiest man, talking about things that would definitely increase his assets even further even they were to unfold as he lays them out. Admittedly, they very rarely do, but that hasn't hampered his financial ascension so far, so why should it begin now?

For all the Musk and Tesla bashing, it's worth pointing out a few commendable things as well. First of them is the fact that Tesla is going for big production figures for a U.S. plant at a time when most companies are looking to externalize their manufacturing to keep costs down. With two-thirds of the growing U.S. EV market under control (according to Musk, at least), however, it makes sense for Tesla to focus on its domestic affairs just as heavily as its expansion to China and Europe.

Musk says Tesla aims for 20% of the global market as it currently sits at just a little over 1%. First of all, imagine what a boring world that would be - not that Tesla or anyone at the company would mind. Every one in five cars you see is a Tesla. Second, if one million cars sold means just over 1%, how many would the company have to build to reach the target percentage? Assuming the overall production figure remains the same, it would be roughly 16 million. Musk currently talks about six Tesla plants globally (Fremont, Nevada, Texas, New York, Berlin, and Shanghai), but they're not all fully functional. And even if each was to produce one million vehicles a year, Tesla would still be ten Gigafactories away from this self-imposed target. However, since there's no deadline (not even one set in Musk's timeline), you can pretty much file this under "things Musk says we shouldn't really pay too much attention to." If you can find any room left in that folder, that is.

The closing segments of Musk's speech included even more material of that sort. He talked about a "dedicated robotaxi" (it's hard to imagine how he can keep a straight face) that's going to look "quite futuristic" as well as Optimus, the Tesla robot (remember the dancing mime) that will do what humans don't want to and will bring an "age of abundance." No, really, this isn't the script of the latest Disney movie. When will Optimus come? You don't really need to ask: obviously, next year ("version one"). 2023 will also bring all the other remaining models: Cybertruck, Semi, and Roadster.

The event ended with a few Model Y deliveries - the first Tesla cars made in Texas - as well as a "surprise" appearance from the Cybertruck that wobbled onto the stage. Seriously, I get it's a prototype, but that suspension needed a few good seconds to stop the truck from bobbing around after getting off the ramp and coming to a halt. It's a pre-production vehicle, but it's not the first one Tesla ever put together, right?

Other people who got up close and personal with the electric truck noticed a lot more things wrong with the EV's build, but the worst aspect is that it failed to launch properly on time and is still nothing more than a promise for next year (which can mean up to nearly 20 months from now). Despite Musk pointing out they've done "new things" to the prototype ("see, no handles?"), it actually doesn't look any closer to production than the original one.

The Cyber Rodeo was yet another classic Tesla event made for the brand's closest and most loyal followers. The Austin plant itself, on the other hand, provided the ramp-up is real and sustainable, will boost Tesla's presence on the U.S. market and consolidate its position as leader in the segment. However, the others are catching up, with Lucid Motors and Mercedes-Benz coming up with EVs that trump Tesla's all-important maximum range. What they do lack right now - and it's a very important aspect - is volumes, and that's precisely what the Austin Gigafactory should offer Tesla. Let's see if "the machine that builds machines" does a better job than its other siblings. 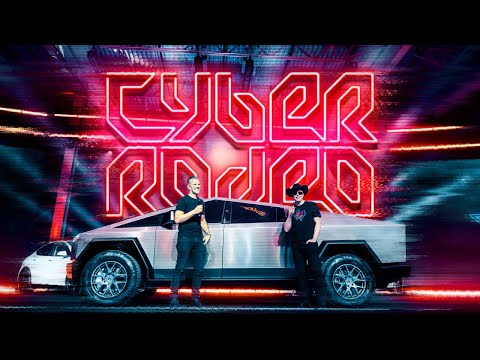