1 Shelby GT500 Tries Exorcizing the Dodge Demon, Does It Get Possessed?

Long before the Blue Oval revealed the mid-size Bronco and the Bronco Sport crossover, we all knew that a pickup truck was under consideration because the body-on-frame rig is joined at the hip to the 2023 model year Ranger. Be that as it may, Ford has reportedly canceled the Bronco truck.
20 photos

According to a couple of sources with insider knowledge, suppliers were informed of the cancellation sometime last month. Although unconfirmed by the Ford Motor Company, the idle gossip does make sense.

On the one hand, the next-generation Ranger will be more than capable of tackling a trail because the Raptor will be available in North America as well. And on the other hand, the pricing difference between the Bronco SUV and pickup would be hard to justify for many prospective customers.

It’s also worth mentioning that mid-size pickup sales are fairly low compared to full-size behemoths, and lest we forget, a Bronco truck would cannibalize with the Ranger. Alas, the Jeep Gladiator will soldier on alone.

Although we’re not likely to see a modern-day Bronco pickup, Marouane Bembli has imagined one for us. Better known as The Sketch Monkey in the world of pixel artists, Marouane used the half-cab U14 as the basis for his rendering. The biggest changes over the original come in the guise of the modular front bumper outfitted with a brush guard, 35-inch rubber shoes, wheel-arch flares, gloss-black front grille, and the LED headlights.

The Sasquatch’d U14 in the following video is probably the coolest rendering I’ve seen in a long time, which makes it all the more harder to accept Ford’s decision to axe the long-rumored pickup. But nevertheless, the Blue Oval does have a little surprise in store for the 2022 model year.

I’m referring to the Bronco Raptor, which has been recently confirmed by the CONCEPS ordering system with two equipment groups and Code Orange paintwork. With a bit of luck, the dune-bashing variant could receive the 400-horsepower EcoBoost force-fed V6 from the Explorer ST. 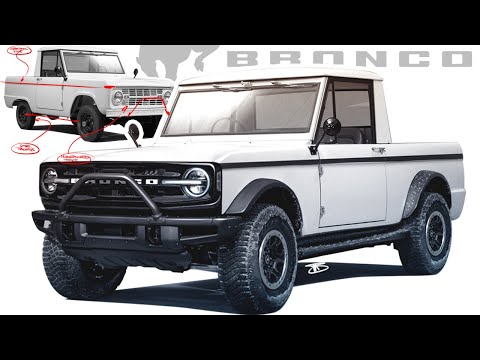