1 Ferrari F8 Tributo Gets Bathed in Carbon Fiber, Anyone Have a Towel?

5 We Have Some Bad News Concerning the Ferrari F8 Tributo and Spider
Car video reviews:
Up Next

The Ferrari F8 Tributo needs a new stance and wheels, said no purist ever. But since most owners are far from being purists, in the purest meaning of the word, quite a few copies have been visited by the tuning fairy since they left the assembly line in Maranello.
11 photos

The list has recently grown to include the black copy pictured above. Fortunately, it manages to keep its changes on the discreet side, as it still looks good. To the average Joe, it is nothing more than a blue-blooded machine, yet true petrolheads have already spotted the changes. Have you?

Why, of course you have, and even if you haven’t, we already told you what these are in the intro. Further delving into the subject, the said Ferrari F8 Tributo boasts a new suspension that hasn’t been detailed whatsoever at the time of writing. It was signed by Novitec, and brings the whole body a bit closer to the asphalt apparently.

And if you don’t see it, then you will most likely hear it, because that sonorous lump mounted behind the seats has become even louder thanks to the aftermarket exhaust system, which also bears the signature of Novitec. The centerpiece is the new alloy set. Made by BBS, and decorated by the typical center caps, the two-tone wheels measure 20 inches at the front and rear, and are hugged by sticky tires that came from Michelin. 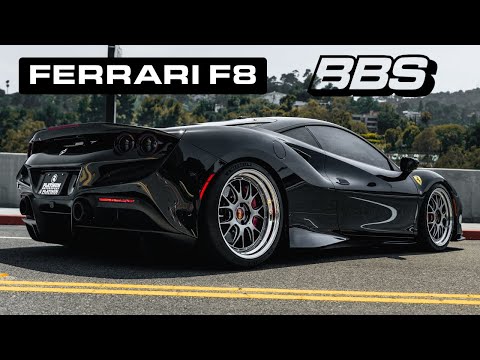