Due to its immense thrust, and neck-snapping straight-line performance, the Tesla Model S Plaid has become THE car to beat down the quarter-mile. At one point, it used to hold on to the record for production vehicles, until the Rimac Nevera put it in the obituaries.
13 photos

Still, with a hair over 9 seconds needed for the run, albeit in perfect weather conditions, with proper tires on its feet, and a special resin covering the asphalt, it has spread fear among supercar owners. Well, among most of them anyway, as one guy thought his Ferrari F8 Tributo might just have what it takes in order to give the electric hyper sedan a black eye.

Nonetheless, that is actually almost one second slower than the Model S Plaid, which needs a hair under 2 seconds to hit 60 mph (97 kph). That’s not from a standstill, as we learned earlier this year, but it is still impressive for a car with space for the family, and more-than-generous cargo area, which can easily be a daily driver.

Now, before wrapping it up, we’ve got to tell you that the F8 Tributo in question was not the only exotic that lined up next to a Tesla Model S Plaid at the said drag strip, as the video that you’re about to watch down below also shows an Audi R8 trying its luck against the battery-electric vehicle. And it’s obvious which one was quicker, isn’t it? 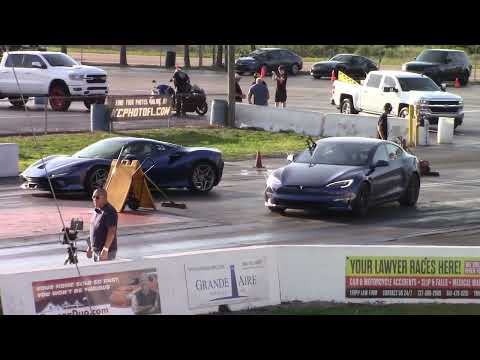