2 The Ultimate Hot Wheels Drag Race Takes Place in a Backyard, It's a 64-Car Battle Royale

Driver of $315,000 Ferrari F8 Tributo Finds Out You Can’t Drive Without Insurance

If not for the likes of Audi’s R8 or McLaren 720S/765LT and – above all, C8 Chevy Corvette – mid-engine sports cars would be a massive exception at the quarter-mile dragstrip among the sea of muscle cars, SUVs, and trucks. Alas, seeing a Ferrari there is still a huge treat.
29 photos

The videographer behind the Drag Racing and Car Stuff channel on YouTube has prepared yet another short but intense feature, mainly centered around a Ferrari F8 Tributo sporting a serene-blue color that makes anyone dream of coastal canyon carving. Instead, the owner of this example seems to have had other plans and lined up for a trio of straight-lined charges at Bradenton Motorsports Park in Florida.

Well, since the town is right on the Gulf of Mexico shores, maybe the dream road trip came next as a way of cooling things down. As for the quarter-mile skirmishes, those were hand-picked against some of the notorious dragstrip “outlaws,” starting with a white Dodge Charger SRT Hellcat. Speaking of colors, have you noticed how the blue exterior gets a stylish contrast with the white leather interior?

Anyway, let us jump back into action from the 0:36 mark as the Ferrari F8 Tributo driver knew what he was doing (someone even thought his F8 jumped the start during each attempt, but that was not the case), showing the slow-reacting Mopar had no chance at all from the beginning: 10.46s win versus a rather shameful 12.07s pass.

Next up, from the 1:08 mark, came the legendary R35 Nissan GT-R, but even Godzilla was not quick enough to beat the nimble F8. Second victory, with a 10.53s run against the opponent’s 11.01s attempt. And, just to show these passes were no mistakes, from the 1:32 mark, the Ferrari also gave a quick 10.41s lesson to an Audi R8 that was thoroughly impressed and gave up the bragging rights with an 11.21s pass.

By the way, there are also some bonus GT-R passes from the 1:45 mark because the JDM sounded too good to be neglected… 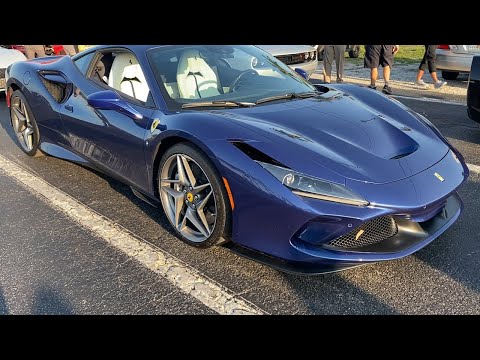