If you ask most people, the Ferrari F8 Tributo does not need an exhaust upgrade. The stock one would be fine as-is for almost everyone who reads this article. However, some people want more, and in that case, tuners are ready to offer products to match their wants.
8 photos

Upgrading the exhaust of an Italian exotic car is not something you should do with parts from your local store, unless you live on the same street as Novitec. Even if that is the case, you might still need to make an appointment or at least place an order for the parts that you want to install, as the company does not stock F8 Tributo downpipes as if these are selling one daily.

With a seven-speed automated twin-clutch gearbox, it can sprint from naught to 100 kph (62 mph) in just 2.9 seconds. It has launch control, as you may be aware, and you can see it in action in the video below.

If the driver has access to a racetrack with long straightaways, or can access Germany's restriction-free Autobahn, they can hit the F8 Tributo's top speed, of 340 kph (211 mph).

We do not know for how long Germany's highways will continue to have sections without speed limits, but racetracks will continue to exist for as long as people are paying to drive on them. Yes, saying you want to go to the track some day means nothing if you never pay to go drive on one, so do not be surprised to learn your local go-kart track is closing because nobody visited it anymore.

With that in mind, put your headphones on and listen to the Ferrari V8 in twin-turbo form while it speeds away in this video. As you can observe, the vehicle is disturbingly fast, and its acceleration happens as if nothing is holding it back. With over 700 horsepower on tap, that's understandable. 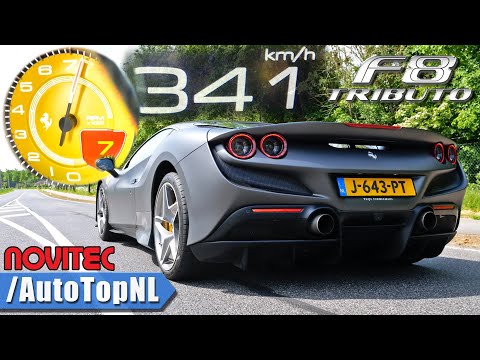