American Truck Simulator Is Off to Wyoming Next, Here’s a Chill Video

The first one revealed back in December is Wyoming, while the second one focuses on Texas. Since the latter has just only been announced less than six months ago, it’s safe to assume that it will be added to the game after the Wyoming updates.

Although Wyoming may the one of the least populated states in the United States, it does have some of the country’s most beautiful national parks and many historical attractions. A brand-new 20-minute gameplay trailer released today emphasizes the joy of experiencing Wyoming’s gorgeous scenery while driving an American truck.

What you’ll be able to see in the video is a full ride from Kemmerer Point of Entry to an area close to the Alpine Truck Stops. Although you might be seeing that some part of this gameplay video routes through the States of Utah and Idaho, all content shown will be included in the Wyoming DLC.

The only issue we have with the team behind American Truck Simulator is that they haven’t yet announced when the Wyoming expansion is supposed to drop. It’s probably safe to assume that it will be launched in 2021, but the wait is excruciating.

Wyoming is just the eighth expansion to release for American Truck Simulator since the game launched five years ago. Seven other expansions are now available for the truck simulator game: Arizona, New Mexico, Oregon, Washington, Utah, Idaho, and Colorado. If we add California and Nebraska, which are part of the base game, it brings the total of states featured in American Truck Simulator to just 10, so the folks at SCS Software still have a long way to go. 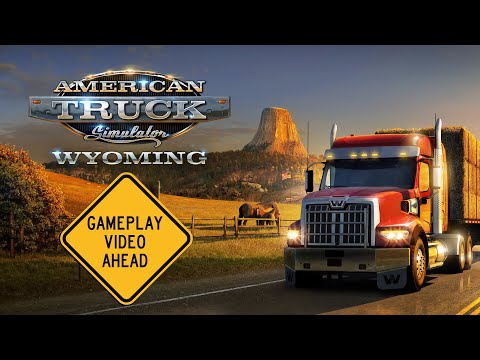