2 Is GM Design Teasing a 7th-Gen Chevy Camaro or Are We Just Getting Ideational?

All-New 2023 Honda CR-V Is Treated as a Mere Facelift, Gets Rugged CGI Redesign

The sixth generation Honda CR-V compact crossover SUV - the brand’s best-selling asset in America - just went official with a couple of feisty powertrains. But, as it turns out, not everyone is happy with the outcome.
20 photos

Honda is eager to raise the stakes for its Civic and Accord-beating crossover as it chases down the top Toyota RAV4 rival with all assets: “a rugged and sophisticated design, along with a new, more advanced 4th-generation hybrid-electric system.” Alas, not everyone thinks the Japanese automaker has earned the right to call this an all-new model.

Marouane Bembli, the virtual artist better known as TheSketchMonkey on social media, is – as always – ready to identify the flaws of new releases and rectify them. For starters, although he kind of loves what Honda has been doing with its styling as of late, the pixel master still identifies the new CR-V iteration as a mere facelift rather than a fully-fledged sixth generation.

Of course, he also comes up with arguments in the latest behind-the-scenes making-of video embedded below. So, as per tradition, around two-thirds of the new feature is dedicated to examining the novelties brought by the 2023 model year compact crossover SUV. Only afterward, from the 7:45 mark, does the CGI reinterpretation commence, and the digital Honda CR-V incurs a string of subtle modifications.

There is just one singular front three-quarters POV and most of the changes are related to the front end where Honda’s fake vents get ditched in favor of a cleaner, minimalist CGI redesign. Additionally, because one can never have enough rugged wheels and tires, the latter also get beefier to remind us that crossover SUVs might also serve as (soft) trail adventure companions!

So, what do you think? Is the 2023 Honda CR-V just a refresh disguised as an all-new generation or has the Japanese automaker made enough changes to earn the right to call it a completely different iteration? 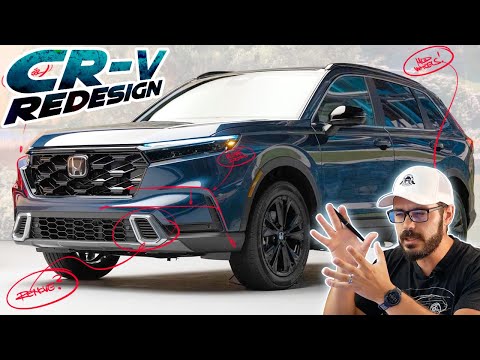