After selling more than 12 million Civics since the first generation in the U.S. alone, Honda's compact contender evolved into a much sportier version for the eleventh generation.

Maybe the classic internal combustion engines were on their last stint. Still, Honda didn't want to say hello to the electric age before offering a state-of-the-art turbocharged gasoline powerplant. Also, the carmaker knew that its customers were looking for sporty vehicles and excellent daily drivers.

The exterior showed a bold stance, with an up-market front fascia that resembled its bigger brother, the Accord (U.S. version). Its angular-shaped LED headlights were narrow and swept-back on the sides. A broad grille took the most significant part of the front bumper's lower side, flanked by two side-scoops with LED fog lights. On the side, the beltline featured a step above the rear wheels, visually connecting the trunk area with the rest of the vehicle.

Inside, Honda returned to its roots and imagined an interior focused on the driver. Its pulled-back A-pillars, the low hood, and the flat dashboard gave a panoramic-view feeling, like in older Hondas. The Japanese carmaker was criticized for the Civic's tenth generation seats and returned with a much better offer. They looked more like those installed in the eighth generation. In the instrument panel, Honda returned to its original concept. It placed the tachometer and the speedometer flanked by the coolant temperature and the fuel dial but in a modern 7" or 10.2" LCD. The floating-design 7" or 9" infotainment touchscreen placed on top of the center stack had about the same height as the instrument cluster, depending on the trim level.

Under the hood, Honda started with a 2.0-liter naturally aspirated engine as the base model, complemented by a 1.5-liter turbocharged and direct-injected unit. 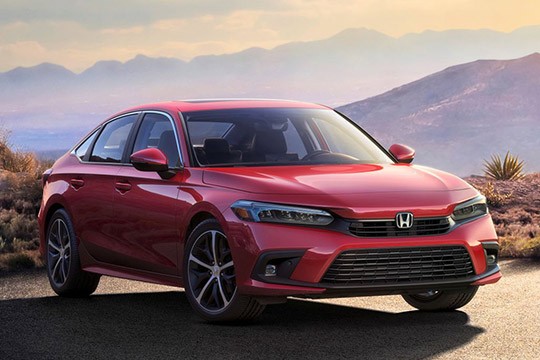