Honda introduced the seventh generation of its biggest SUV, the Pilot, in November 2022 for the 2023 model year, and it was also the most potent high-rider in the carmaker's history.

The 2023 model year promised a better experience for its customers, offering a larger vehicle with a roomier interior and better off-road abilities. Moreover, the Pilot's fourth generation didn't look like an oversized CR-V model anymore. In addition, it didn't follow the supercharging trend, placing its bets on customers who enjoyed the beauty of a naturally aspirated engine.

With a rugged look, the 2023 Pilot featured a flat, vertical front fascia that was mostly covered by a broad grille. Its LED headlights resembled those installed on the Civic, yet its design was dominated by sharp lines. From its profile, Honda's largest crossover featured a raked-forward C-pillar and an unusually designed third side window that featured an ascending lower line towards the tilted D-pillar. In addition, at the back, the Pilot got standard LED taillights. Finally, the Trailsport version was fitted with steel underbody shields, plus front and rear recovery points.

At the time of launch, the Pilot boasted the roomiest cabin in its class. Moreover, it offered something for every taste. Thus, the base version came fitted with a standard digital instrument panel with an option for a 10.2" TFT. Atop the center stack, the car received a 7" touchscreen with an option for a 9" unit for the infotainment system.

Under the hood, the carmaker installed its famous 3.5-liter V6 engine with a direct injection system. It was paired as standard with a 10-speed automatic gearbox that sent the power in all corners. 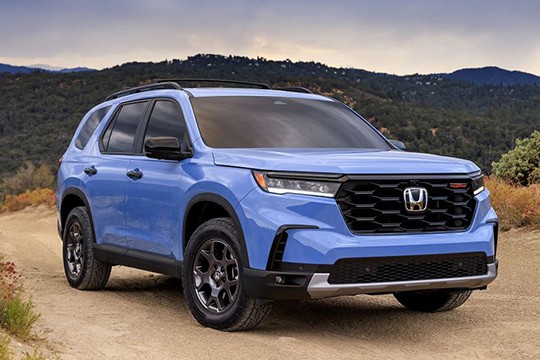