4 Marc Marquez Will Get Fourth Operation to His Shoulder, Miss the Most of the Season

5 Wayne Rainey Rides a Trike from His Wheelchair
Car video reviews:
Up Next

Some of you will know that there are two kinds of motorcycle riders in this world: the ones that have fallen off their bike, and the ones that will fall at some point. It's just a part of the game. And the faster you go on your motorcycle, the greater the risk of getting a serious injury. I've known hundreds of competitive track riders over the past few years, and they've all broken at least a few bones in their career.

Going at ludicrous speeds on your motorcycle on public roads can be deadly. The race track provides a much safer environment for you to unleash your full potential, but it's never 100% safe. Every couple of years, you'll see some pro riders passing away after a serious crash during a race. Things can take a turn for the worse from one second to another.

It's the risk they are willing to accept in the pursuit of becoming the fastest men or women on two wheels. Nobody likes to think about that danger, but they all acknowledge it one way or another.

Reportedly, 104 riders have lost their lives while competing in the MotoGP World Championship, since its debut in 1949. That's less than half of the reported casualties reported by the Isle of Man TT, but more than double compared to F1 races.

The quest for making motorsports safer is a neverending journey for official sanctioning bodies, organizers and companies involved. But even so, pushing the limits of what man and machine can achieve together can sometimes lead to disaster.

But, for every rider that has lost his life racing on the track, how many others have gotten into serious accidents? Let's have a quick look at some of the most successful MotoGP riders of all time. Giacomo Agostini is still the record holder with 8 titles under his belt, and the only man who can hope to dethrone him is Marc Marquez.

The Spaniard has won the World Series six times so far, but he has been going through a rough period lately. Valentino Rossi is of course the second most successful MotoGP rider ever, and Mick Doohan is down in fourth.

Three British riders and Eddie Lawson from the USA are tied for fifth, with a total of four titles each. And then there's the list of people that have won the championship three times. Jorge Lorenzo reigned supreme in 2010, 2012, and 2015.

But the other two Americans on the list were the fastest men on two wheels in the late '70s and early '80s. The legendary Wayne Rainey was inches away from securing his fourth World Title, as he was leading the championship with Kevin Schwantz in second place.

Sadly, his motorcycle racing career came to an unfortunate, abrupt stop at the Italian Grand Prix in Misano, back in 1993. Following a high-speed crash that damaged his spine, Wayne Rainey was left paralyzed from the chest down. Even though he has received multiple awards in the years following his crash, many fans were left wondering how big their favorite would have become if not for the crash.

Now, almost 30 years since the sad incident, Wayne Rainey is reunited with his Yamaha YZR500. With all the controls moved to the handlebars, Wayne was strapped on to the bike so that he would be secured in place. The 61-year-old legend from California then went out for a ride at the Goodwood Festival of Speed. For many motorcycle racing fans at home and on the track, the tear-jerking moment is bound to go down in history. 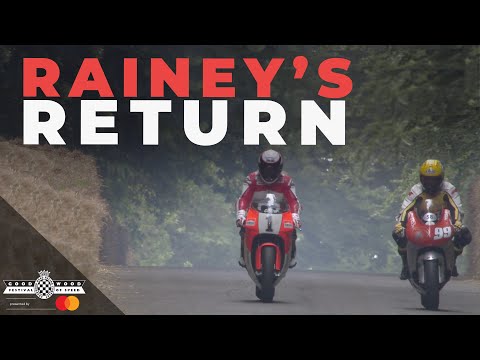