3 Former Racing Driver Susie Wolff Tests Out the Mercedes-AMG One, It Was "Pure Joy"

4 Banned in the U.S.A.: Mercedes-AMG One Hypercar Won't Be Living the American Dream

After its grand unveiling at the beginning of the month, the Mercedes-AMG One has now checked the public and dynamic premiere boxes, too. The hypercar from the Affalterbach brand is at the 2022 Goodwood Festival of Speed, where yesterday’s attendees got the chance to witness it in action.
11 photos

Set loose between the haystacks on the famous hill climb, the Mercedes-AMG One has demonstrated its agileness in front of the audience, with a short emphasis on its DRS that can be activated at the push of a button, working similarly to the system in Formula 1 cars.

And it is not the only motorsport-inspired gizmo that the limited-production exotic model has, as it also packs a 1.6-liter V6, sourced from the company’s F1 car. The internal combustion engine is backed up by no less than four electric motors, two driving the front wheels, one mounted on the crankshaft, and another one integrated into the turbocharger.

Production of the Mercedes-AMG One is capped at 275 units, and none of them will make their way to the United States, as it hasn’t been built with U.S. homologation in mind, the automaker reportedly said not long after the premiere. Even if they had launched it on the left side of the pond, it’s not exactly like you could have reached out to your local dealership, as all copies have been spoken for, despite the starting price that equals to almost $3 million for each one. 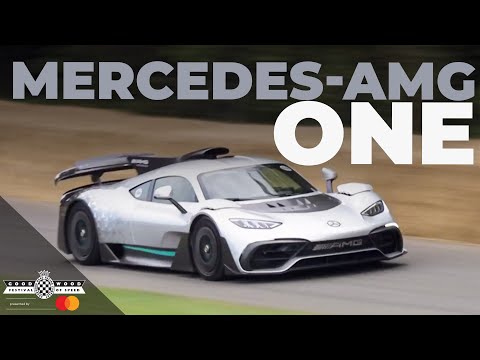