4 Modernized Lamborghini Countach "Carbon Copy" Is Out for Hypercar Blood

The Ford Mustang is a car that’s known worldwide. From Alaska to Cape Town and Tokyo, you just know you’re looking at a Mustang. This, however, offers no resemblance whatsoever to the classic. That doesn’t mean it isn’t worthy.

If you ever want to know how one possible future for the Mustang might look like, take a good long look. It’s no longer the Mustang we’re used to seeing. This looks more like a super sports car just with some ‘Stang genes all over it.

This Mustang hypercar is the creation of Ankit Ukil. Currently a design intern at Tesla, he’s got a knack for exterior car design from Maserati to Renault and now Ford. The project is dubbed Mustang Vision 001 and was created as part of a Ford sponsored project. But the design seems to be leaning more towards the Ford GT or Group-C Le Mans cars.

So, what are we looking at? I see this beautiful creation not as a botched job on a Mustang. I personally removed the Mustang tag and just ended up calling it the Vision 001. The only aspect like the ‘Stang would be the head and taillights, the rest is basically a Group-C Le Mans vehicle.

We can see the front end dropped low and even split to help it stick to the road. It’s here where we can see the Mustang headlights. From there the hood stays low until it meets the windshield, where the shape of the car rises suddenly to blend into a lifted rear.

To the sides of the hood, the massive wheel wells hug the shape of the tire and instead of blending into the rest of the car, they just suddenly drop off. The rear of the body starts from a pinch behind the hood, just like Group-C rides.

From this pinch the rest of the 001 comes into view. The body leads to a rear that covers the width of the wheels. However, it seems that Ukil may have run out of time in finishing the design. The rear is almost completely inexistent. Sure, there's a diffuser and some trunk scoops to stick the 001 to the ground, but that’s it. Maybe it was a way for him to show-off the Mustang lights. Taking into consideration nothing else is Mustang, this might make a little sense.

But it gets better. I did mention that Ukil is currently involved in projects with Tesla, and this little princess has some of the Tesla spirit. But I think it more of Ukil’s doing. Anyway, what I'm trying to say here is that the 001 was created to be an electric hypercar.

Ukil says the idea behind it, was this: “My answer to that was to create a track-specific electric hyper car for Mustang which would be super low production, but at the same time, would be a digital asset for the company that can be experienced by anyone using simulator and VR technology to be used in any video games similar to Team Fordzilla’s P1 initiative.”

But this means that what we're looking at is only going to be driven through a driving simulator or 3D goggles. 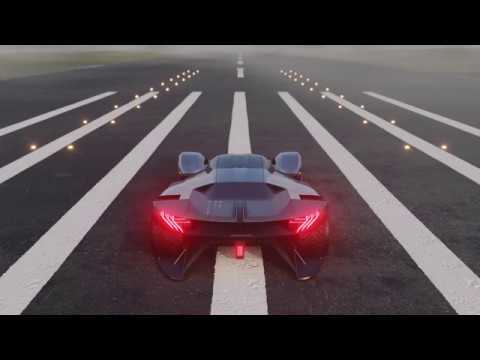