3 Challenger Scat Pack vs. The Detroit World Is a Lesson Full of Quick Drag Runs

8s SRT8 Jeep Humiliates Camaro, Then Tries to “Climb” the Tree During Burnout

Although many people question the sanity of building a five thousand(ish) drag racer that actually has the aerodynamic qualities of a concrete block, no one will deny that some mods are taking these high-riding machines to new ET lows. Besides, it’s not the first time we see a Jeep running for timeless quarter-mile glory with spectacular results.
20 photos

Jeep's third generation Grand Cherokee (WK) occupied the latter half of the 21st century's wonderous initial decade, and although it was kind of short-lived (model years 2005-2010), it made a lasting impression for both all the right and wrong reasons.

We’ll start with the bad, as the iteration is one of those cars that brings back nightmares of the DaimlerChrysler variety. As for the positives, we’ll point out to the creation of the Street & Racing Technology V8 version, a.k.a. the mighty SRT8.

After all, it clearly serves our purpose, as a thoroughly modified example from the era is evidenced as the hero of the latest video from the Drag Racing and Car Stuff” YouTube channel. According to the description, the turbocharged black beauty initially lines up with a fourth-generation white Camaro.

With all the mods hidden under that spectacular hood and AWD, it’s no wonder the SRT8 shoots out like a bullet and gives a thunderous eight-second run (8.87s at 156 mph/251 kph, to be more precise). It clearly puts the eight in SRT8 with this performance and also humiliates the proper sports car, which actually nailed a very respectable 9.75s run.

Next up, the Jeep seems ready to go against a representative from its own family, a Dodge Charger, but the crowd gathered at the Bradenton Motorsports Park for the Street Car Takeover is in for a completely different evolution. Unfortunately for the SRT8 and the driver’s ego, the pre-race burnout delivers a hilariously epic failure, with the Jeep seemingly trying to climb the Christmas tree after a botched burnout.

Fortunately, everyone involved was all right, save for the driver's reputation, his prized high-riding machine... and (probably) the Christmas tree. 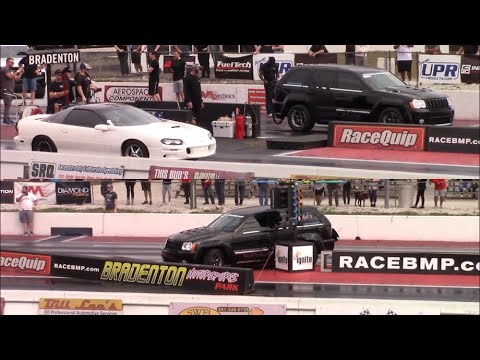