Ever since the Red Lil Express truck, Americans started to understand that a powerful SUV might be a better choice than a sports car, and Jeep made that even clearer with the introduction of the SRT-8 variant in 2005.

Jeep worked with SRT (Street & Racing Technology) to create the monster-WK Jeep, unveiling the result at the 2005 New York International Auto Show. Unlike its siblings, it had no off-road abilities. Moreover, its all-wheel drive system was mainly used for better acceleration times and slippery road conditions. Thus, it was the second-fastest Chrysler product behind the mighty Dodge Viper.

At first sight, the SRT-8 version was different than its regular sibling because it stood lower to the ground. In addition, the front apron was extended, so it sat just 7" (170 mm) above the asphalt. On the sides, the enlarged wheel arches and the SRT-8-only unique 20" light-alloy wheels were unusually big for those times. At the back, the go-fast version of the Grand Cherokee featured a dual exhaust system that peaked out its chromed tips from the middle of the rear bumper.

Jeep also made the car's interior looks a little bit sportier, with high-bolstered front bucket seats that sported the SRT-8 logos embroidered on their seatbacks. At the back, the automaker placed a similar bench as on the rest of the range, albeit it was leather-upholstered.

Under the hood, Jeep installed a 6.1-liter HEMI engine carried over from the Dodge Charger SRT8. It produced more than 400 horses and sent them into all corners via a five-speed automatic transmission from the Mercedes-Benz basket. The rear axle was fitted with a Dana 44 differential, and the end result was a 0-60 mph (0-97 kph) time in less than four seconds. 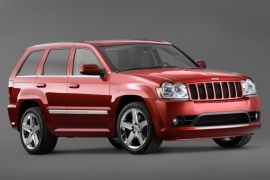