1 Stock RAM TRX Drag Races Standard-Cab Supercharged F-150, Not So Much a Gap as a Void

5 Hennessey Venom 650R: The Viper That Terrorized Supercars Back in the Late ’90s
Editorial

Not to be the one acting up like a bickering old lady, but how come John Hennessey's car is a Porsche 911 Turbo S? Wasn’t Hennessey Performance Engineering all about American cars, SUVs, and trucks? Anyway, that little detail does not make this big Christmas setup any less fun.

After all, his personal 2021 Porsche 911 Turbo S is one of the greatest sports cars the world has ever seen. And it does not arrive in stock condition at the company’s Pennzoil proving grounds for the top speed attempt(s). Instead, power has increased from 641 horsepower to no less than 750 ponies.

Of course, the German sports car will need all the extra oomph it can muster, given the Texas “Bad Santas” tucked inside and the big Christmas tree strapped on top of the roof. Luckily for this silver 911, the high-speed attempts weren’t carried by the bearded Santas, and instead, racing driver Spencer Geswein took command.

With the goal set clear – delivering the world’s fastest Christmas tree – it was just a matter of pushing the pedal to the metal and hoping there is enough track length to secure all-time bragging rights. Well, it turned out to be a “good effort” from the tuned 911 Turbo S, which reached a maximum of 175 mph (282 kph). But it didn’t overthrow the reigning champ.

Oddly enough, that one is not a sports car per se. Instead, it’s Hennessey’s 2019 entry, a hulking HPE1000 Jeep Grand Cherokee Trackhawk. That one managed to beat everything with a top speed of 181 mph (291 kph). By the way, for the sake of scientific accuracy (and perhaps some plain old top speed fun), they removed the tree for one last 911 run. And thus, came up with a 206-mph (332 kph) pro tip. 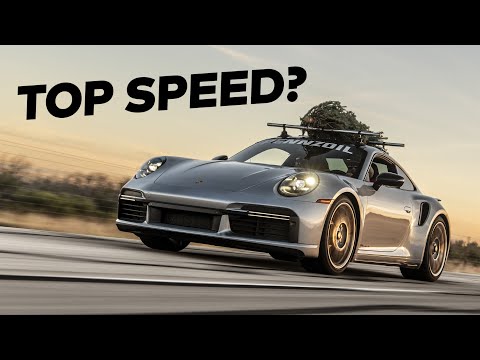