4 Hennessey Venom 650R: The Viper That Terrorized Supercars Back in the Late ’90s

Stock RAM TRX Drag Races Standard-Cab Supercharged F-150, Not So Much a Gap as a Void

Vlad Mitrache
Everybody knows what the TRX is all about - until the Tesla Cybertruck comes along (and that might be a while), the Hellcat-powered truck from Stellantis is the quickest one you can buy. It is the truck of choice for anyone who prioritizes performance over every other variable.
9 photos

According to logic and common sense, that shouldn't be a huge market seeing how a pickup truck is, by definition, meant to be a working horse, not a leisure vehicle. However, the undisputed success of the Ford F-150 Raptor over the past years has put it beyond any doubt that, if the manufacturers build this type of vehicle, the public will buy it. And now, the success of the TRX is showing one more thing: the more powerful, the better. Well, that was a no-brainer, right?

Hennessey Performance seems to agree with that since they offer the Mammoth 1000 option, a package that will boost the TRX's already impressive top output of 702 hp to no less than 1000 hp. That's probably at least twice as much as anyone will ever need, and yet the Texas-based tuning company has no shortage of clients.

The thing with the TRX is that, like the Raptor, it's built for speed over uneven terrain - the kind of surface where you need slightly more aggressive tires to find grip. That's what the performance truck from RAM comes equipped with from the factory and, even though it will still perform a lot better than you would expect from something its size, the rubber it has is far from ideal when scraping against a flat, paved surface.

However, the stock RAM TRX is not the star of this video produced by Hennessey Performance, but its opponent. Giving off serious SVT F-150 Lightning vibes, the standard-cab Ford truck lining up beside the T-Rex hides a powerful supercharger and a total output of 775 hp thanks to Hennessey's Venom 775 package. That's significantly more power than the 702 hp the vehicle next to it makes.

And it's not the only thing stacking up in the Ford's favor. The two-door truck is also lighter, lower, and more aerodynamic (if we can even talk about that with this kind of vehicle). One other thing that might not be as obvious is the fact its wheels are smaller in diameter, and thus better suited for quick acceleration. Finally, there's the tire aspect. We already talked about the option the stock TRX gets, but the Hennessey-enhanced Ford sits on street tires, giving it a massive advantage in terms of grip.

You wouldn't normally bet against the RAM TRX in most drag races, but given everything we've gone over so far, could it still pull a miraculous win out of the bag? Well, it is December so, if there was ever a time for something like that to happen, it's now. 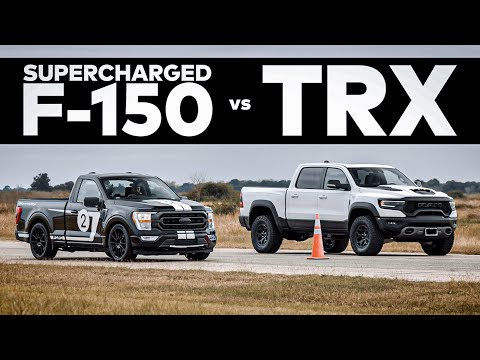