2 Swiss-Mile Robot Is a Car, Quadruped, and Humanoid Packed in a Four-Wheeled Machine

Wheeled robots are really starting to catch on, as this design makes them suitable for a variety of applications. The Ascento Pro is a good example of versatile mobile bots and it combines both the flexibility of the legs and the speed of wheels.
6 photos

Developed by Swiss company Ascento Robotics, the Ascento Pro is an upgraded version of the previous Ascento 2 machine, which was launched in 2020. That robot was already impressive in terms of motor skills, but the Pro version brings even more features to the table.

With a simple, compact, and modular design, the Ascento Pro is designed in a way that leaves enough space for custom sensors and various payloads. It has two legs, each with a motorized wheel, and a tensional spring in the knees, which compensates for the bot’s own weight. It can bend its knees to get even smaller, it can walk on any surface, climb stairs, jump up and forward, and hop over obstacles.

Unlike its older sibling, the Ascento Pro is not partially, but fully autonomous (being equipped with cameras, LiDAR, headlights), and it can reach higher speeds of up to 7.4 mph (12 kph). Its swappable, rechargeable battery offers up to 8 hours of use on a single charge. The bot can also dock and recharge completely autonomously.

Ascento made its two-wheeled machine customizable, so users can equip it with additional sensors, cameras, and even arms. With the process being entirely mechanical, users can easily replace the components.

You can use the Ascento Pro for a variety of operations, thanks to its modularity and versatility. This machine makes for a great last-mile delivery robot, whether you deploy it to deliver food, mail, samples between labs in hospitals, and more. It can also be a great source of inspiration in your robotics research, or you can use it for inspection and surveillance to offer just a few examples.

There’s no info on the pricing or availability of the Ascento Pro, but the manufacturer encourages anyone who’s interested in its two-legged machine to contact the company for full specs and any other details. 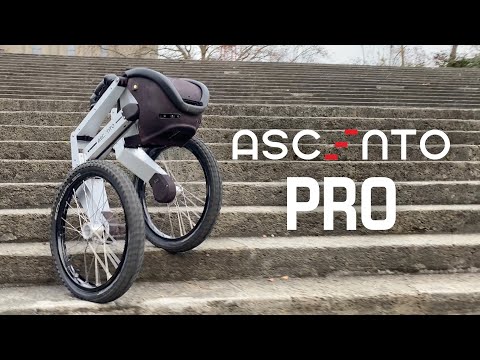