If you’re a Ford Mustang fan, you’re going to enjoy how this tuned 5.0 GT spec model performed next to a Charger Hellcat during a rolling race. Normally, the latter should be able to run laps around the Mustang, but once you start fiddling with those Coyote V8 engines, all bets are off.
6 photos

Meanwhile, the Charger Hellcat uses a 6.2-liter supercharged Hemi V8 unit, with 707 hp (717 PS) and 650 lb-ft (880 Nm) of torque. Add a cold air intake mod, which is the case here, and the output goes up a tiny bit, with everything going to the rear wheels via an eight-speed automatic transmission.

So then, both cars have auto boxes, but the Hellcat has a 150+ hp advantage. Then again, the Dodge also took on a passenger and weighs considerably more than the Mustang—we need to take all these things into account; otherwise, we’d probably be way too impressed with that Mustang. More than we should, anyway.

The two cars raced twice, both times form a roll. The first race was perfectly even if you ask us. The second race resulted in the Charger pulling ahead slightly, so make of that what you will.

Lastly, we’d also like to say that it feels nice seeing a Hellcat doing what it does best, instead of flipping over pickup trucks, like in that recent Cars & Coffee incident from Loveland, Colorado. Sure, that one was a Challenger, not a Charger, but both cars can be equally difficult to control in the wrong hands. 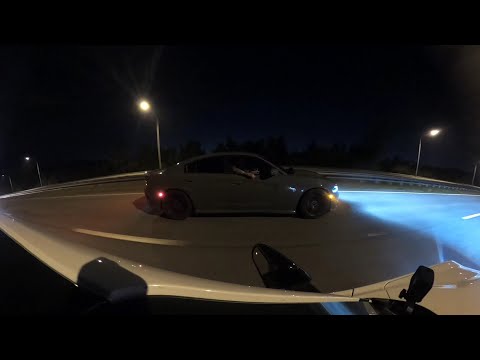