Prince Harry Is a Rad Power Bikes Kind of Guy

850-WHP Camaro SS Thinks It's Got Charger Hellcat FBO Beat, Gets Stunned Instead

Home > News > U-turn
Sergiu Tudose
If you’re going to race a Chevrolet Camaro SS against any Hellcat-badged Dodge, your only chance at a win is to give the Chevy a massive boost in terms of power output because a stock version wouldn’t stand a chance.
6 photos

Powered by a 6.2-liter LT1 V8 engine, the Camaro SS normally produces 455 hp (461 PS) and 455 lb-ft (617 Nm) of torque. You can get it with either an eight-speed automatic gearbox, or a six-speed manual, the latter box being available to this video’s protagonist. Granted, a Camaro ZL1 would stand a much better chance against a Hellcat, but that’s beside the point.

According to the uploader, this Camaro SS boasts a Magnuson 2650 supercharger, full bolt-ons, upgraded cams, and a methanol injection tune, with the end result being 850-wheel horsepower.

That works out to about 970 hp at the crank, perhaps even more—it might be pushing 1,000 hp. By the way, this looks very much like the same Camaro SS that battled a tuned Shelby GT350 a few weeks ago, and that Mustang had over 1,000-wheel horsepower.

What about this Charger Hellcat, you ask? It’s got a full bolt-on E85 setup of its own, minus long tube headers. The video’s description doesn’t provide us with any performance figures, but we’re pretty sure it puts down north of 1,000 hp; otherwise, there’s no way it would have that much top-end pull. You’ll definitely need to watch this clip from start to finish in order to get a real sense of just how fast this Charger really is.

In the end, this was a spectacular race, and the best part is that we surely haven’t seen the last of these two cars. 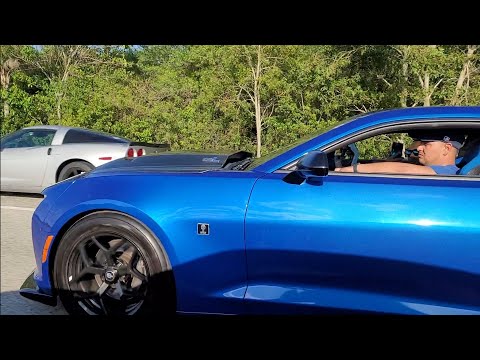