4 The 2022 Emira: Lotus Says Goodbye to the Combustion Engine With Help From AMG and Toyota

400-HP Lotus Emira Shows How Fast It Can Accelerate to 124 MPH, Are You Impressed?

Home > News > U-turn
Dragos Chitulescu
It's interesting to see how Lotus cars have evolved in the past few years. You can no longer buy a new Evora, Exige, or Elise, but instead, you can gawk at the Eletre, Emira, and Evija. This transformation feels somewhat similar to the one we've seen over at Mclaren, and we can't wait to see what the British manufacturer is planning on next.
8 photos

People have started taking delivery of the Emira already, and you know what that means. Some journalists have been lucky enough to get behind the wheel of one already, and with any luck, we might get to that point soon.

We all know that Lotus cars can be quite fun around the racetrack, as high-end performance is embedded in their DNA. That doesn't necessarily mean they'll be lightning-quick in a straight line though. Going fast isn't all about horsepower, and the average speed you'll record around the track is more important than the top speed.

The guys over at Autotop.nl have managed to get their hands on a Hethel Yellow Emira V6. Naturally, they took it out on the freeway for a bit of wide-open-throttle testing. The Toyota-sourced 3.5-liter, supercharged V6 will output a maximum of 400 horsepower and 320 lb-ft (430 Nm) of torque.

In an attempt to make the Emira more user-friendly, it has grown in size quite a bit, compared to the early Elise models. And by quite a bit we mean that it's twice as heavy as a first-generation Elise, at 3,097 lbs (1,405 kg). According to official stats, it should be capable of going from 0 to 60 mph (96 kph) in just over four seconds, with a top speed of 180 mph (290 kph).

On the second attempt, the telemetry results are slightly better, with 11.64 seconds required to get up to the same speed as before. It all seems pretty fun, and we can't help but wonder how long it will take for some companies to develop the upgrades needed to make the Emira even faster than it is today. 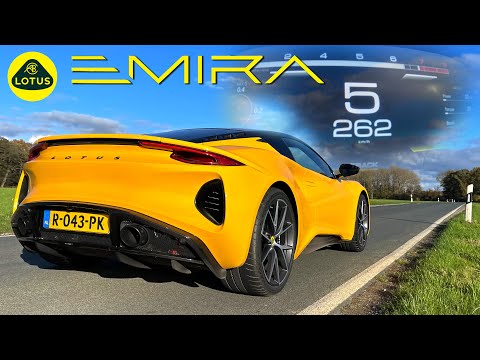