Lotus took a decisive step and entered the SUV territory in 2022 with the Eletre, which was called a Hyper-SUV thanks to its attributes and brand's heritage, even though it was an overstatement.

Even though it wasn't built in Warwickshire, UK, but in China, it still benefited from the British company's know-how in terms of design and engineering.

From the outside, its hood resembled the one seen on the Elise, but that was the only resemblance with other sports cars made by Lotus. On the front fascia, the Eletre featured two side scoops that flanked the black grille and sported the daytime running lights. From its sides, the muscular appearance showed flared wheel arches and an exhaust vent behind the front wheel-fenders. A waved-shaped beltline adorned the side above the retractable door handles. At the back, the carmaker installed a raked-forward windscreen and an unusual shape for the tailgate, with a red light strip crossing it from side to side. A set of 23" light-alloy wheels completed the high-performance look of the car.

Inside, if the carmaker wished to create a minimalist interior, it didn't quite succeed. The dashboard featured two screens, one in front of the driver and the other one on the passenger side, and a bigger, 15.1" touchscreen on the center stack. In addition, a head-up display with AR (Augmented Reality) was shown in front of the driver. While all of Eletre's elements were digitally controlled, some key features were doubled with regular switches. As expected, it offered room for four adult passengers on individual bucket seats. The combined luggage space (frunk and trunk) of the car was 470 liters (16.6 cu-ft).

Built on a dedicated 800 volts platform, the Eletre was powered by two electric motors, one for each axle, which offered a total output of 592 hp (600 PS). 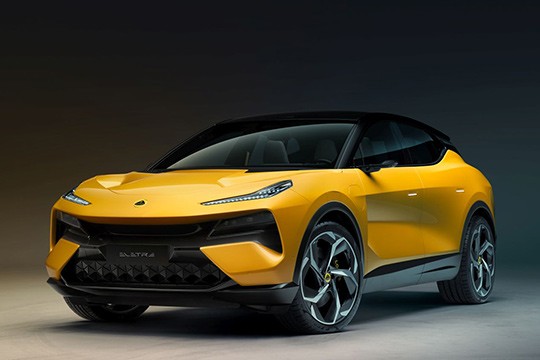