1 Hypercar Meets Legend: Emerson Fittipaldi Gets Behind the Wheel of the Raucous Lotus Evija

Lotus introduced a final run for the Exige model adding a few extra goodies and offering it as a track-focused car or a better all-rounder.

The Exige was the sports car for those who needed more power than the Elise, for those who didn't want to stop on the right side of the road and cover it if the rain started. Moreover, it offered a supercharged V-6 instead of an inline-four. For short, it was a better daily driver. Maybe not as good as a Boxster, but it was much more exclusive.

Exige was the car that, along with the Elise, helped Lotus survive on the market, and the British brand had to say a big "thank you" for that. The 2021 Final Edition 390 was the right way to do it. It was offered in a specific color scheme and added black door mirrors, wing, and aerodynamic details.

Inside, Lotus made the car for mixed driving. It wasn't that bare-bone cabin fit for racing but offered some comfort. The Final Edition 390 featured leather sport bucket-seats with high bolstering and nicely padded door-panels. But the main change was for the instrument panel that was changed from analog dials to a TFT display with two screens: one for daily driving and another for track use.

Exige Final Edition 390 featured the same supercharged V6 from the rest of the range tuned to offer 390 hp to the rear wheels via a six-speed manual gearbox. It was the least powerful version of the Exige Final Edition, tuned for better street use. The kind of car that the owner won't trailer it to and back from the track. 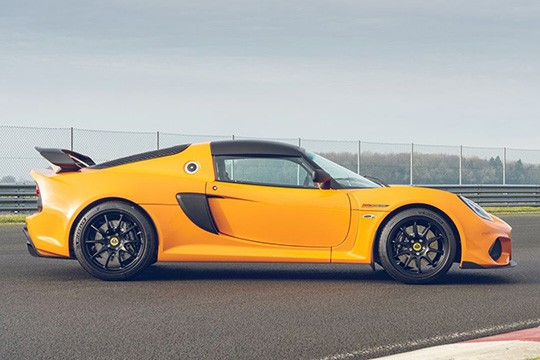