The Elise was around for almost two decades and the 2017’s model was faster and lighter than its predecessor.

The exterior upgrades were not that visible at a first glance, but looking with greater attention, the new model featured a redesigned front bumper that had a wider and taller center grille. Most of the visual upgrades were not completely to improve its design, although it made it look more aggressive, they had their aerodynamic purpose and reduced aerodynamic lift. The Cup 260 kept the aggressive carbon-fiber side skirts from the Cup 250.

The sports car had ultra-lightweight 16-inch alloys at the front and 17-inch alloys in the rear, both featuring Yokohama Advan Neova tires.

The interior carbon-fiber seats wrapped up in black Alcantara with door panel matching stitching, either red or yellow.

The Elise Cup featured a 1.8-liter supercharged engine developing 250 horsepower with 188 pound-feet of torque. The car reached 60 mph in 3.8 seconds and finished the Hethel track in one minute and 32 seconds.

The production of the Cup 260 was limited to only 30 units with a higher price than the Cup 250. 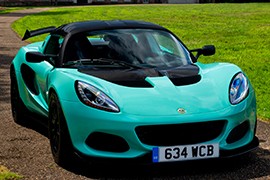