3 Okay, Who Let Their Unicorn Out To Puke on This V6-Powered Dodge Charger?

2024 Toyota Grand Highlander 7/8-Seat CUV Reveals Everything, Though Only in CGI

Home > News > Renderings
Aurel Niculescu
The Japanese automaker is going to have a field year in 2023, as it will be riddled with interesting premieres. And Toyota promises to have something for everyone.
18 photos

From the little C-HR’s second generation (the international version, as the U.S. spec will make way for the arrival of the larger Corolla Cross) to the hulking Grand Highlander long-wheelbase seven- or eight-seat crossover SUV, it seems that the Japanese carmaker has everything covered.

Speaking of the latter CUV, which seems to be a direct answer to Honda’s all-new Pilot, we are dealing here with a new version of the mid-size Highlander crossover SUV’s fourth generation. One of the all-time biggest-selling nameplates for the company, the ICE or 340-hp hybrid Highlander is a step up above the Venza and top-selling RAV4 but also a bit cramped when compared to the larger Sequoia SUV.

As such, Toyota probably thought it needed some kind of double jeopardy assets when trying to oppose Honda in North America after the latter just revealed the all-new, fourth-generation Pilot, including a more adventurous TrailSport trim. By the way, the Toyota Grand Highlander has been on everyone’s radar for an exceedingly long time, whether we are talking about spy photographers, official teasers, or the imaginative realm of digital car content creators.

Speaking of the latter, the good folks over at the AutoYa info channel on YouTube were keen on sharing their virtual artist’s vision regarding the Grand Highlander on a couple of occasions, including one of the ‘Hybrid Max’ variety. And their ‘full-size’ eight-seater sure looked posh when unofficially depicted in ritzy colors or with the new hybrid powertrain under the informal body.

But now they also have a satellite venue dubbed AutoYa Interior, and that is where all the Toyota cockpit action occurs, with the Grand Highlander showcasing the potential changes compared to the real-world Highlander, the more spacious seven- or eight-seat interior, plus the now-traditional unofficial color combination reel. So, what do you think, is it worthy of our CGI hall pass, or are the changes too subtle to warrant our vote?

As for the upcoming, official Toyota Grand Highlander, the wait is almost over so we suggest taking all these renderings with the proverbial grain of salt, in the meantime. After all, it will not take long before the beloved Asian company will grace the 2023 Chicago Auto Show (February 11-19), dubbed as “The Nation's Largest Auto Show,” with the hulking SUV. For now, all we know is that Toyota will indeed make some changes to the design of the three-row model compared to its smaller sibling – but the teaser was only showing the rear end, complete with new taillights and the ‘Hybrid Max’ plus ‘Platinum’ designations. 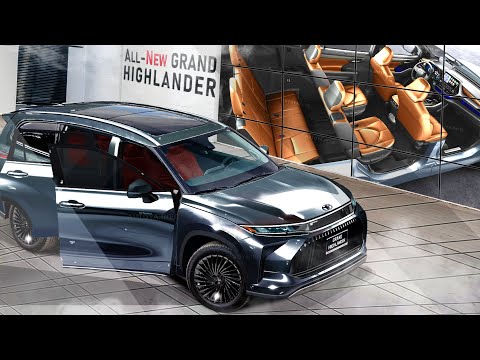