2 Okay, Who Let Their Unicorn Out To Puke on This V6-Powered Dodge Charger?

2023 Harley-Davidson Road Glide 3 Trike Is Now Out and About, Cheaper Than Tri Glide Ultra

Home > News > Renderings
Aurel Niculescu
The Japanese automaker is mulling a big year for 2023, complete with numerous introductions in different categories, from cars to SUVs, and from crossovers to trucks.
8 photos

We have new heroes like the 2023 Prius ‘Hybrid Reborn’ and S235 sixteenth generation Crown that was just reinvented and reintroduced in the United States as a novel crossover sedan. We also have upcoming stars like the family-oriented Grand Highlander with seven or eight seats that will fight the likes of the Honda Pilot TrailSport as the CUV alternative to the rugged Sequoia SUV.

But then there are also the best-selling stars, and chief among them might be the potential unveiling of a next-generation Tacoma mid-size pickup truck for North America. But how about its former sibling, the iconic Hilux? As a reminder, the formerly compact (1968-2004), now mid-size pickup truck is a successor to the expansive family of classic light trucks (Stout, anyone?) that has no less than eight generations under its belt.

However, the Hilux and Tacoma lifestyles diverged during the middle of the 1990s as the former became an international star while the latter dedicated its efforts solely toward the Central and North American regions, plus a few other territories (Bermuda, New Caledonia). As such, unfortunately, you cannot have both in the same place and at the same time. But that is only valid in the real world, it seems.

Over the dreamy realm of virtual automotive artists, meanwhile, anything is possible – and also probable. As such, meet Dimas Ramadhan, the virtual automotive artist behind the Digimods DESIGN channel on YouTube, who has a passion for pickup trucks of all shapes and sizes. Lately, that love CGI-manifested itself in the form of the ‘all-new’ 2024 Jeep Comanche compact unibody revival, 2025 or 2026 Mazda ‘BT-60,’ a next-gen Tacoma that was both rugged and disconcerting, plus a 2024 Ford Maverick redesign in quirky EV cue (although it was still ICE-powered, at least in part), among many others.

Now, since many Toyota Tacoma fans might have retained a sour taste after that botched attempt at blending Hyundai Tucson cues with Isuzu D-Max styling on the proud mid-size pickup truck United States best-seller, here is something to wash out the bitter aftertaste. It does have the Hilux moniker but as far as I can tell from the quick CGI presentation of this two-tone black-and-green ‘Black Edition,’ even Tacoma enthusiasts have something to look forward to here, given the streamlined yet tough design.

Plus, are those TRD (Pro) wheels that we see there, hinting that this author would not mind at all if Toyota decided to retcon the ninth generation of the Hilux and fourth iteration of the Tacoma into the same model instead of keeping them separate, as during the recent past? 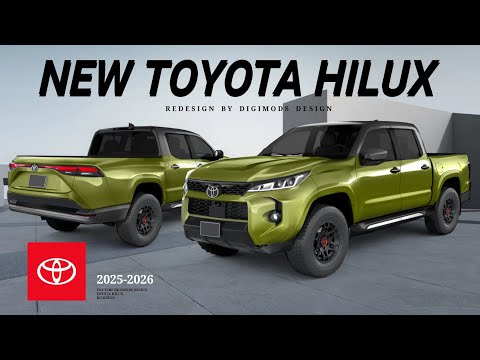