4 Next Chevy Camaro Imagined as Fast EV Sedan, Has Surprising Trio of Influences

Aurel Niculescu
We recently discussed the potential of Ford’s 2023 Everest turning into a worldwide affair. Instead of remaining something that only a few regions get access to. Now, here is someone inadvertently helping our case.
19 photos

Soon ready to hit Blue Oval dealerships across Australia, Asia-Pacific, and Africa, the 2023 Ford Everest was recently unveiled as the T6.2 Ford Ranger-based family adventure SUV that Europe and the United States will not get. Not even in Everest Raptor form.

And it is not because of the lack of trying to make a case for it. At least as far as automotive virtual artists are concerned, they were quick to make the high-performance digital transformation on more than one account. However, they might have missed the diesel point entirely.

Unlike the 2023 Ford Ranger Raptor sibling, who is getting a 3.0-liter twin-turbo EcoBoost gasoline engine to also reach America for the first time, the 2023 Everest only has two engines options. And they’re both of the nasty diesel variety. So, perhaps there is a need for decisive action to gain access to more markets. At least virtually, for now.

Thus, after a quick pickup and Everest Raptor break, the virtual artist better known as SRK Designs on social media is back to lovingly making a tempting EV transformation. With a side of forbidden Blue Oval fruit, on this occasion. And the 2023 Ford Everest zero-emissions version would also carry the Lightning nameplate.

Meaning it would rather share the feisty EV powertrain options with the F-150 Lightning rather than Ford’s other battery-powered hero, the Ford Mustang Mach-E crossover SUV. And we think it would be more than suitable for this work/family/adventure type of vehicle!

Now, there is just one glaring issue. The behind-the-scenes making-off process was a bit too subtle, and people might still easily mistake this for the ICE-powered Everest if ever real... 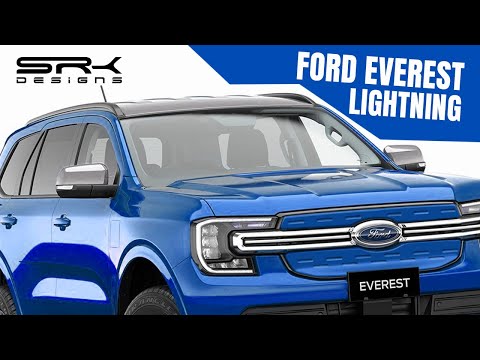