2023 BMW M2 Is Back for More Testing, Watch It in Motion on Public Roads Here

The new generation BMW M2 has returned to the spy arena, about two months after we last saw it in the open. The latest prototype was captured in motion on the roads near the Nurburgring, with an antenna on the roof, and if you listen closely, you will hear a bit of a burble.
6 photos

It appears that the front bumper was damaged, as that’s why that tape is there, on the passenger’s side. The grille sports even more camouflage compared to our previous sightings, and due to that, it appears to be more pronounced. However, we do know that it will sport horizontal slats, and there’s an alleged leak too that backs it up.

Sweptback headlamps will flank it, and it will have a discreet ducktail spoiler on the trunk lid, new diffuser with cutouts for the signature quad exhaust pipes, and a few other special touches. The profile does not appear to have changed that much over its predecessor, though it will feature new wheels that will spin around the high-performance brakes. Complementing it will be the M-tuned suspension and model-specific badging.

Unlike the regular 2 Series family, it should get a different infotainment system and digital dials. These could run the latest Operating System 8, and will likely sport dedicated submenus and loading screen animations. Topping it off will be the new front seats with extra bolstering, premium upholstery with contrast stitching, and carbon fiber accents, whereas the M logos will bedeck it.

Power-wise, the all-new M2 Coupe is expected with the twin-turbo 3.0-liter straight-six from the latest M3 and M4, perhaps making 480-490 hp. The output would give it a significant advantage over the current M2 Competition and its 405 hp, and would place it between the standard M3 and M4, and the Competition variants. An all-electric version of the small sports coupe is also rumored.

Production is understood to kick off toward the end of 2022, but the unveiling could take place a bit sooner than that. Still, North America will probably get it before mid-2023. 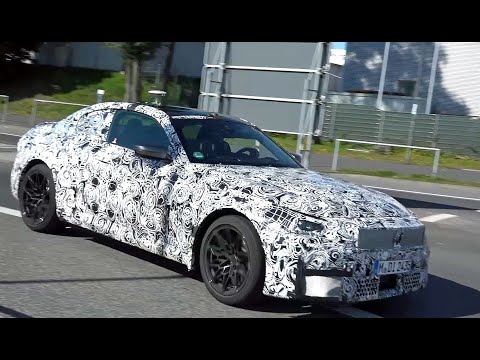