1 2022 Range Rover P400 Guns for Top Speed on the Highway, Makes Itself Heard

2022 Range Rover P400 Guns for Top Speed on the Highway, Makes Itself Heard

The new generation Range Rover is just beginning to pop up in reviews across the world, which means it was just a matter of time until we get to see one unleashed on the German autobahn. The vehicle in question is a P400 version, which means a mild hybrid with 400 horsepower on tap.
6 photos

Its makers say it can sprint from naught to 62 mph (100 kph) in 5.8 seconds, while its top speed is 150 mph (241 kph). That is more than enough for what most drivers will ever need in life, especially if you take speed limits into account. But luxury car owners, especially those in this segment, do not stick to what they require.

With that in mind, would 394 horsepower (400 PS) and 406 lb-ft. (500 Nm) of torque be enough? Well, the folks at Auto Top NL went ahead and took it for a spin, including a “soundcheck” for its inline-six-cylinder motor. In stock form, it does not sound that bad at all.

One does appreciate the fact that the rear bumper does not come with fake exhausts. On the other hand, the exhaust is not visible from the rear at all, but that is a different matter. JLR has gone for an even more elegant look here, and the result is similar to a sculpture on wheels, at least when seen from certain angles.

Where flat-out acceleration is concerned, real-world tests show that the Range Rover P400 is close to its official specification, at least according to a popular acceleration measurement app that is called dragy. You can see and hear the SUV in action in the video embedded below.

According to Auto Top NL's scoreboard, the new model in P400 form is quicker than a 2011 Range Rover 5.0 SC was, and it also beat cars like the 2009 Audi Q7 V12 TDI in the same kind of sprint, from 100 to 200 kph. A 2017 Audi SQ7 does make amends for the German brand, but Range Rover does offer more powerful versions of this model, so the horsepower war is far from over. 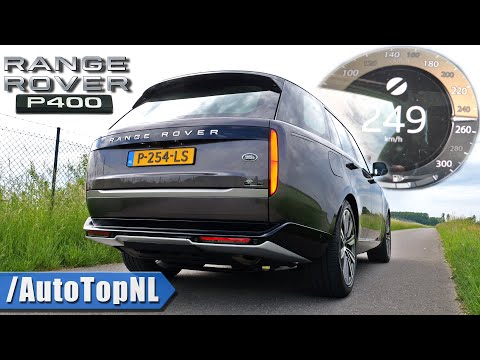