Like its famous rugged, body-on-frame predecessor, the 2022 Land Rover Defender was available as a long-wheelbase version named Defender 130, even though it came on the market two years after its siblings.

Back in 1983, when Land Rover decided to offer a more utilitarian version for the already rugged vehicle, it added a longer chassis with a 127" (3.2m) wheelbase. It offered it with either a single- or a double-cab pickup bodywork. In those times, the car didn't sport the Defender nameplate. That came later, and it was again offered with that long-wheelbase version. In 2022, the carmaker chose a different approach for its famous SUV.

Sharing the same wheelbase as the Defender 110, the 130 version featured a longer rear end. Thus, the trunk area sported a longer floor with wider side windows and quarter panels behind the rear doors. The 1.49 m (58.7") rear overhang decreased the departure angle of the SUV but offered more room inside. Moreover, even though it had plenty of space for the spare wheel, it still had it on the rear door.

Inside, the most significant change was, obviously, in the back. Land Rover installed the third row of seats, with enough room for three adults, leading to an eight-seat vehicle. Last but not least, the trunk area was more than enough. It provided up to 2,516 liters (88.8 cu-ft) of space up from the 2,380 liters (84 cu-ft) available in the Defender 110. Like its siblings, the SUV offered a standard 11.4" Pivi Pro touch-screen infotainment system, with OTA (over the air) updates.

Under the hood, the 2022 Defender 130 received a choice of inline-six hybrid powertrains, ranging from 246hp to 395hp. 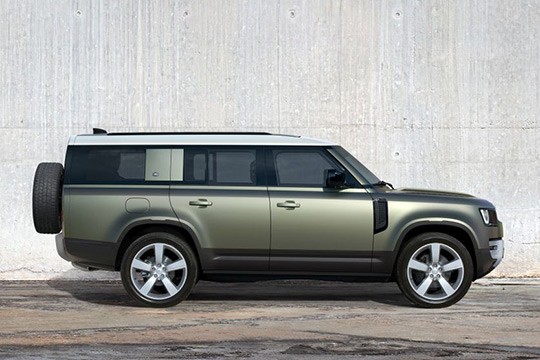