4 Hyundai, Kia, Bullish About 2022 Despite the Chip Shortage and Market Conditions

Remember when Kia and Hyundai were nothing more than alternatives for Toyota? The South Koreans have really stepped up their game since then, which brings us to the newest electric vehicle on sale in the United States.
24 photos

EV6 is the rather unimaginative moniker of this fellow. Joined at the hip to the boringly named Hyundai Ioniq 5, the all-electric sport utility vehicle is the second application of the E-GMP (Electric-Global Modular Platform).

However, should you consider it? Doug DeMuro says yes, although there are a few things that could’ve been better. To make a long video review short, the EV6 GT-Line tallied 63 points on the leaderboard, two points less compared to the Mach-E Premium. “In the end, though, the Mustang is just a little bit more fun, quicker, sharper, and exciting,” highlighted DeMuro.

As far as quirks and features are concerned, the Kia benefits from individual touch controls for the heated seats, ventilated seats, and heated steering wheels at the top of the center console. The stylized interior trim also happens to be leftfield compared to the competition, as is the electronic panel that can morph from HVAC to stereo and infotainment controls.

“Those shortcuts definitely aren’t the best design in terms of usability,” said DeMuro, which is only understandable because digital interfaces play second fiddle to proper buttons and knobs. The digital instrument cluster is especially infuriating because it doesn’t list what song or radio station is currently playing. On the upside, Kia has developed a so-called Quiet Mode that plays media only in the front seats to not disturb the kids in the rear.

Rear climate vents are present as well, as are flush door handles and an Aston Martin DBX-inspired LED light bar that swoops down the rear fenders of the EV6. Priced from $40,900 excluding the federal tax credit, the zero-emission crossover is offered with two battery choices, rear-wheel drive, and a dual-motor option. The most EPA-estimated driving range you can expect is 310 miles (500 kilometers) for the rear-wheel-drive Long Range. 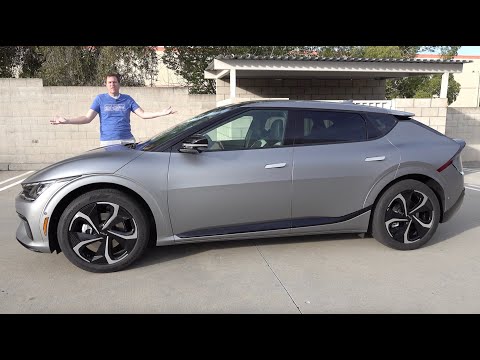