Slotted between the small-sized Kia Stonic and the Niro, the Xceed enlarged the offering for the Ceed lineup by adding a crossover flavor to the already appealing Korean hatchback.

Kia considered that it didn't have enough crossovers and SUVs in its lineup and increased the ground clearance of a Ceed hatchback, added some plastic trims around the wheel arches, and called it Xceed. But that was in 2018.

Come 2022, Kia refreshed the Ceed lineup, which led to an upgrade for the Xceed as well. The new, facelifted version came with a new grille and LED headlights. At the front, the chromed trim around the main grille emphasized the tiger-nose design theme created by Peter Schreyer for Kia in 2006. Underneath, the bumper sported a second grille fitted with a black mesh grille and flanked by boomerang-shaped trims and a pair of side scoops. From its profile, the Xceed showed a higher ground clearance than its regular hatchback sibling, and a set of black trims adorned the wheel arches. On top of the vehicle, the carmaker added roof rails as standard. The back of the car revealed a new rear apron, with a mix of black and body-color elements but no tailpipes in sight.

Inside, Kia updated the infotainment system mounted on top of the center stack in a floating-design position. Inside the instrument cluster, an improved 12.3" digital instrument cluster provided all the required information for the driver. Depending on the options and packages, the Xceed offered a pair of sports seats at the front, while the 40-20-40 split-folding rear bench was similar for the entire range. That could enlarge the trunk space from a generous 426 liters (15 cu-ft) to an impressive 1,378 liters (48.6 cu-ft). 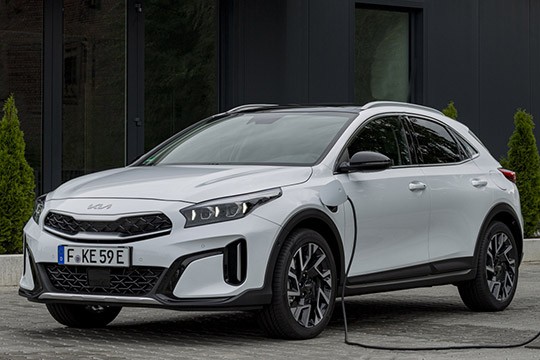