Kia unveiled the hybrid version of the fifth generation of the Sportage at the 2021 Los Angeles Auto Show.

The Sportage was already a well-known product on the market on both sides of the Atlantic. While it debuted as a humble and one of the shortest cars in its segment, by 2022, it became one of the longest. However, if the first generation was more of a rugged, body-on-frame vehicle (not available on all markets), the 2023 model year was a global product with upmarket flavor.

On the outside, there were few differences between the HEV and the rest of the Sportage range. It featured the same floating-design look for the “Tiger-nose” element on the front fascia and the boomerang-style LED daytime running lights. At the back, the notch-shaped taillights looked united via a black line that crossed the vehicle from side to side. In addition, a small HEV badge adorned the tailgate. But the most distinct element that differentiated the exterior of the hybrid version from the rest of the range was the unique design for the 17” or 18” alloy wheels.

The interior looked just as futuristic as the exterior. The dashboard sported a 25” wide display that combined the 12.3” instrument panel with the 12.3” touchscreen for the infotainment system under the same piece of glass. Thanks to the asymmetrically designed dashboard, the driver had access to most buttons and controls. At the same time, the side passenger was spoiled with more legroom and an airy feeling. Depending on the trim levels and options, a Harman-Kardon sound system transformed the Korean SUV into a concert hall on wheels.

But the drivetrain was the most essential difference between the HEV and the rest of its siblings. A 1.6-liter turbocharged and direct fuel-injected engine provided 226 hp (229 PS) to a standard six-speed automatic gearbox. In addition, a 44 kW motor helped the SUV achieve outstanding fuel efficiency for its class. Furthermore, the Sportage HEV was fitted with front or all-wheel drive systems depending on the trim level. 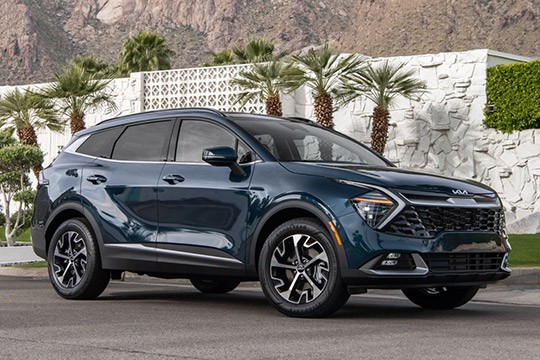