Kia developed the Telluride, especially for the U.S. market, and unveiled it in 2019 with high hopes for its flagship SUV. But unfortunately, the world pandemic and the chip shortage hurt the sales of this big rig.

Come 2022, the Korean carmaker unveiled a facelifted version for the Telluride, bringing more features and an improved design. Moreover, the interior received other upgrades that made it compete against the best premium SUVs on the market. Last but not least, their car was offered with two new trim levels: X-Line and X-Pro.

At the front, the carmaker introduced new LED headlights with a vertical design. They flanked the redesigned grille, which featured a fence-like pattern instead of the formerly used hexagonal one. In addition, the new logo took center stage instead of the former oval-shaped badge. Finally, in the lower bumper, in the apron, the carmaker added a pair of fog lights on each side.

Inside, the most significant upgrade was for the dashboard. Kia installed as an option two 12.3” screens seamlessly connected; one for the instrument cluster and the other, atop the center stack, for the infotainment unit. The new setup replaced the previously used one that sported a set of 10.3” screens. Moreover, with its improved infotainment unit, the Telluride allowed users to use digital keys installed on their Apple Watches, iPhones, or Samsung Galaxy phones.

Under the hood, the same 3.8-liter engine Atkinson Cycle that provided 291 horses paired to an eight-speed automatic transmission. Since it sent all the oomph in all corners, the Telluride, with its four-wheel independent suspension, was not afraid of some off-road expeditions. 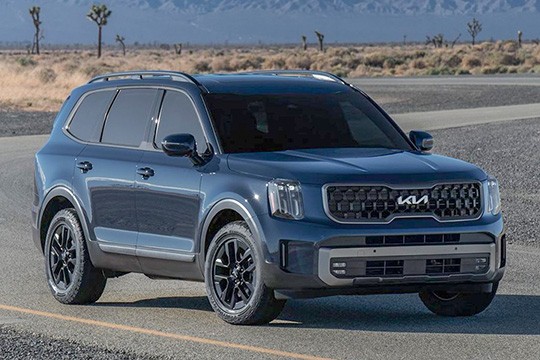