2 One of Just 2,000 Dodge Durango SRT Hellcats Goes Out for Some POV Drive Action

While Dom was missing in action because Vin Diesel chose “The Chronicles of Riddick” instead, Paul Walker’s character Brian O'Conner teamed up with comic relief Roman Pearce (Tyrese Gibson) and gorgeous Eva Mendes, among others, for some mindless action. We’re just reminding you, in a nutshell, what 2 Fast 2 Furious is all about.
24 photos

While none of the installments from the “Fast & Furious” franchise has ever been anyone’s choice for the perfect movie to screen at an artsy festival, they’ve always been great fun, silver screen escapism, and great action... with cars and loveable characters (for the most part).

Still, this series has had its own highs and lows, just like most other things in life. According to the vast majority of the public and critics, one of the lowest points—no offence John Singleton (the director is renowned for the Academy-nominated “Boyz n the Hood”)—has been 2 Fast 2 Furious.

Basically, all I can remember from the CGI-heavy (and not so great rendering, in spite of the big budget) action flick is Eva Mendes, the pair of Mitsubishis Brian and Roman drove for some random bad guy (and tried to apprehend him, of course), and above all, the lovely silver-and-blue Nissan Skyline GT-R of the R34 variety.

That’s probably what ultimately saved the movie from being discarded by the fans, so it’s no wonder people have even tried (with various degrees of success) to replicate this ride in real life. Granted, without the help of CGI to smooth things out or a huge blockbuster budget, there’s only so much one can accomplish, as evidenced by the latest video from the AutoTopNL YouTube channel.

We’ve grown accustomed to seeing the Euro-focused channel mostly handle stuff that’s very familiar to Old Continent fans, but every now and then, we see exotic rides that spice up our day. This one is a fine example of that, though not just for positive reasons.

While usually there’s just one person in their videos, this time around, the driver has a partner for the POV ride—as if they’re trying to make us feel like Brian and Roman... It’s a hit and miss because for the most part, we’re treated to some furious driving (mostly within legal limits, though), and their chuckles do come out as funny when the driver struggles to handle this Frankenstein that has a GT-R engine and a GT-T architecture.

But every now and then, something is amiss, such as the ashtray compartment falling almost every time there’s a quick shift! And one can also jump to the 3:20 mark to see the car starting to fall apart as aftermarket electronics decide they had enough. 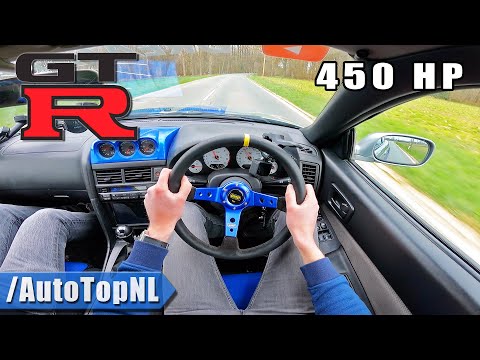