Nissan introduced the Sakura model in its lineup as an electric-only vehicle in 2022, a small-sized kei-car that could offer a range of 180 km (111 miles) and provide room for four adults.

After Mitsubishi joined the Renault-Nissan Alliance, most of its research in the EV segment became known and used by its new partners, which helped it escape from extinction. Nissan used the same platform used for the Mitsubishi eK X EV and produced the Sakura. A model that was showcased as a concept car in 2019. The vehicle's name is taken from the traditional Japanese cherry blossom.

The Sakura was designed mostly as a small-sized MPV. Its very short front end and the tall greenhouse were typical for the kei-car segment. At the front, Nissan placed a broad black grille regardless of the car's color. Yet, since it was an EV, the grille was actually a panel, while a lower opening in the apron took responsibility for cooling the battery pack and other electric features. On the base trim level, the car featured regular headlights, while the upper versions received three-projectors LED headlamps, a first in the vehicle's segment. The tall greenhouse and five-door configuration were revealed from the Sakura's profile.

Inside, the carmaker installed a simple design that featured a storage area in front of the side passenger. Nissan installed a TFT display in front of the driver while a second touch-screen sat above the middle section of the dashboard. The gear selector and the climate-control buttons cluttered the center stack. For the front passengers, the carmaker installed a pair of high-mounted bucket seats, while at the back, a split-folding bench offered enough room for two additional occupants.

The drivetrain consisted of a single motor that provided 47 kW (64 hp) sent to the front wheels only. It was fed by a 20 kWh lithium-ion battery pack. The car also could serve as a powerbank, being able to provide electricity for a whole day for a house. 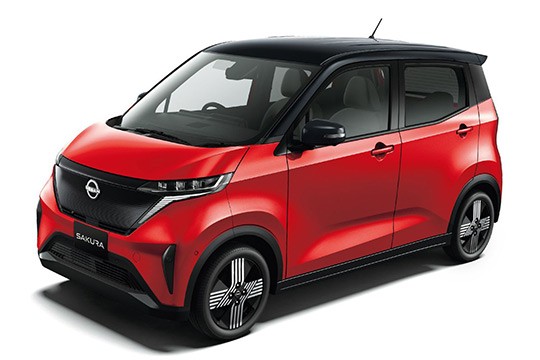