Ram’s 2021 1500 TRX might have won the cool names battle (along with the pony count, probably) against even the all-new third-generation 2021 Ford F-150 Raptor. But that doesn’t mean the Blue Oval’s predecessor doesn’t come on top when it comes to nicknames—in Mexico, that is. Oddly enough, an example of the breed has even found its way into Europe, where it projects angry exhaust sounds onto the local fauna.
19 photos

While over the decades, Ford’s F-Series has become truly legendary thanks to its home market success, that doesn’t mean the F-150, for example, isn’t popular in other places of the world. Take Mexico, for example, where the high-performance Raptor even comes with a second, very cool nickname: “Lobo.”

For anyone who doesn’t understand Spanish, the word means “wolf.” Basically, the Raptor not only gets a better animal reference in Mexico (since wolfs aren’t extinct, at least not yet), but it’s also likened to one of the most fascinating apex predators that ever walked on planet Earth.

How a menacing all-black Ford F-150 “Lobo” Raptor intended for the Mexican market ended up in a video of the European YouTube channel AutoTopNL is a bit of a mystery. But only at first, because the early footage depicting the high-performance truck while standing still also give us an important hint.

As far as we can tell, the Raptor sports a set of dealer plates. A quick look across the internet shows there’s a bunch of companies in The Netherlands that will treat an interested customer to a 2020 Ford F-150 (Lobo) Raptor upon request.

With the conundrum settled, it’s time to focus on the angry growls of the North American pickup truck, which seem to attract the attention of local four-legged residents easily. After all, isn’t that a horse neigh of approval we hear from the 0:53 mark while the Raptor travels the quiet alleys of a little town?

That’s one question we’re probably never going to get answered, but at least the zero to 62 mph (100 kph) acceleration test brings another puzzle piece to the table. The initial performance card we’re presented in the beginning called for the 3.5-liter V6 biturbo mill to send those 450 ponies to all four wheels and extract a feisty 5.9-second sprint.

But the GPS data logger showed it’s a bit off from the task, nailing the threshold in precisely 6.4 seconds. Frankly, this finding sounds more accurate than AutoTopNL’s initial estimate, given that Ford’s own official figure isn’t exactly way better at 6.3 seconds. 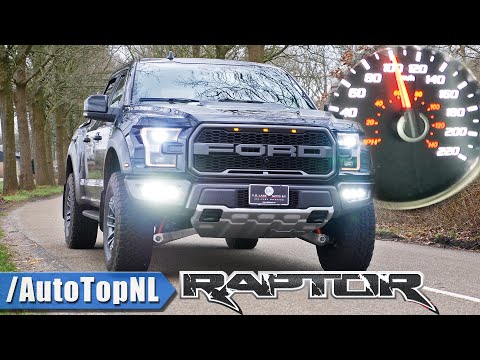