1 Hemi-Powered 1976 Plymouth Duster Drag Races 1965 Buick Skylark, Is In for a Surprise

Hands on the Volkswagen ID. Buzz: This Is What the Press Photos Did Not Show

Introduced for the 1970 model year, the Duster is joined at the hip with the Valiant. Produced for 1971, the fastback coupe in the featured clip is rocking the LA-series 340 that Plymouth replaced with the 360 in 1974.
15 photos

Finished in Rallye Green over a houndstooth interior that features a four-speed manual transmission, this particular example of the breed is fairly light. Including the driver, it tips the scales at 3,418 pounds (1,550 kilos).

From steep insurance payments to emission controls and the often-blamed oil crisis of 1973, the writing was on the wall. High-performance powerplants were mostly gone by 1972, and the introduction of catalytic converters in 1975 sealed the deal. It seems crazy, but the most powerful version of the Chevy Camaro from the 1975 model year cranked out just 155 ponies.

Turning out attention back to this pure stock drag race that was filmed in September 2021, the car on the other lane is a 1970 Buick GSX Stage 1 with the Turbo 400 automatic and 3.42 gears. Fitted with BFGoodrich Radial T/A rubber boots, the yellow-painted blast from the past is a heavyweight at 4,180 pounds (make that 1,896 kilograms) including the driver.

Only 280 units were produced with the Stage 1 package and torque-converter automatic, and they’re obviously collectible nowadays. The question is, can the Duster 340 one-up the GSX Stage 1 over the 1/4-mile? Well, it can’t. 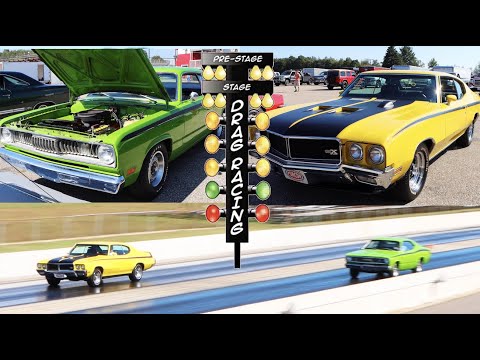