5 Ex-Ferrari Designer Analyzes the Ferrari Daytona SP3, Says It's a 9 Out of 10
Car video reviews:
Up Next

Remember when Buick made thoroughly desirable cars, not bland-looking utilities? The GNX springs to mind, a Regal-based coupe that could hold its own against a Ferrari Testarossa thanks to a 3.8-liter turbo V6.
7 photos

Gifted with a Garrett spinny lad featuring a ceramic impeller, the 231-ci engine runs 15 pounds per square inch of boost. A four-speed transmission recalibrated for acceleration needs to be mentioned as well. Believed to have been underrated by General Motors, the six-cylinder lump in the GNX is believed to belt out approximately 300 ponies and 420 lb-ft (569 Nm).

Co-developed with ASC/McLaren Performance Technologies, the most badass car produced by the otherwise bland peeps at Buick in the 1980s could hit 60 miles per hour in 5.5 seconds. The standing quarter-mile is dealt with in 13.4 seconds at 104 miles per hour (167.3 kilometers per hour), while the top speed is claimed to be 124 mph (200 kph). Not bad at all for a two-door coupe that weighs 3,500 pounds (1,588 kilograms), excluding the driver.

Buick intended to make 200 units, but as fate would have it, a grand total of 547 were manufactured for the 1987 model year. Originally priced at $29,389 or $73,400 adjusted for inflation, the Grand National eXperimental served as the muse for the mighty GMC Syclone and GMC Typhoon.

The GNX also inspired Khyzyl Saleem’s latest design study, a carbon-clad widebody electric vehicle that’s ready to gap C8s at every given red light. “I’m still not sure how I feel about muscle cars that have zero sound, but at least they look pretty,” said the pixel artist who spent five years at Ghost Games, working on the Need for Speed franchise we all know and love.

The Kyza also penned the Polestar 1 hero car from Need for Speed Heat, released in late 2019 to so-so reception from specialized publications. 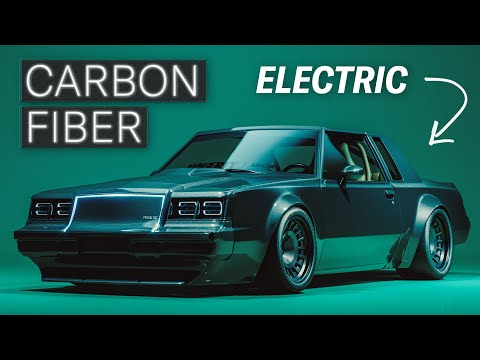