3 Jay Leno Jumps Into the Morgan 3 Wheeler, Recalls Driving One Into a Ditch

5 This Is the Last Steel Chassis Morgan That Will Ever Be Made
Car video reviews:
Up Next

The Brits at the Morgan Motor Company have been working on an all-new model that will continue to have the iconic three-wheeled configuration. The new model is set to be revealed next year, and the marque has decided to show us the sketches that inspired its design.
7 photos

The new model from Morgan, yet unnamed, is said to be the company's most configurable vehicle ever. As you can observe, the collage of sketches shows various possible design ideas, all featuring the three-wheeled configuration.

Do not force your imagination to figure out which of those sketches was the overall winner, as Morgan's design department representatives have already explained that no single sketch in isolation reveals the exact look of the new model. Fortunately for us, Morgan has previously revealed images of the prototype of the upcoming model.

We already know that it comes with an inline-three-cylinder motor sourced from Ford. Morgan has worked with the Blue Oval ever since 1933. It is worth noting that the engine is not the multi-award-winning 1.0 EcoBoost, but a naturally aspirated unit instead. The latter's displacement has not been revealed, but we can only hope it will be rev-happy and have a fair bit of power and torque.

The company has promised a bold and eccentric design, which will be defined by a "technical front end" that is "trailed by a fluid form," as Morgan officials explain. In other words, the rear of the all-new three-wheeler is expected to be kept as simple as possible, while the front will come with a bit more panache.

As you may have observed on the prototype, the vehicle will have a single exit exhaust on one side, bigger wheels than the previous Three-Wheeler from Morgan, as well as the look that this company is known for. The shift from a dual-exit exhaust to a single exit is linked to the change in powertrain, which would not require this technical solution.

It is fascinating that Morgan still managed to get the type approval for this vehicle at an age when many passenger cars are eliminated from the range by their manufacturers in lieu of stricter emissions regulations. 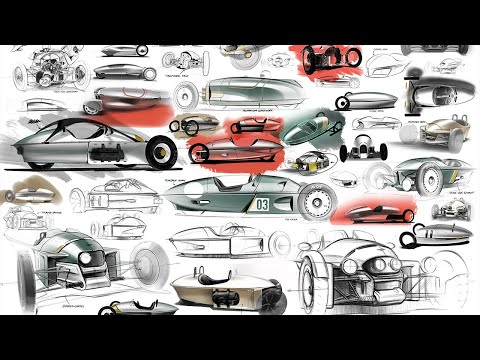 Editor's note: The photo gallery also shows the prototype of the upcoming three-wheeled model from the Morgan Motor Company.