The British company produced the 3 wheelers between 1910 and 1952 and their present for the 100th years anniversary was a new 3 wheeler that came to life in 2011, launched at the Geneva Motor Show.

The new Morgan was powered by a V-Twin bike engine that was mated to a Mazda 5-speed manual gearbox. The 115 hp developed by the S&S motor was transmitted to the rear wheel. And how does 4.5 seconds sound for a 0-100 sprint? More like the BMW’s M3 performance.

The lightweight materials used to produce the Morgan made a total of less than 500 kg. The 3 Wheeler didn’t have a roof and was basically a tubular frame with two rollover bars around the 2-seater comportment.

The open seat cabin revealed black seats wrapped in soft leather and simple cluster gauges. The cabin was designed to look like a plane’s cockpit, with the aluminum toggle switches.

The classic Morgan lacked power steering and had no traction control.

From inside the cabin, the driver and passenger could see the front wheels and feel the heat of the exposed exhaust.

The trike featured a green paint job, similar to the British Spitfire interceptor plane and it also included the RAF roundel symbol.

The sound of the engine was rather powerful and beautiful, roaring at over 3,000 rpm. 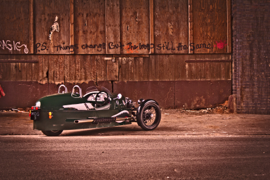