The British car manufacturer Morgan has created a coupe version for the Aero roadster and unveiled it at the 2005 Geneva Motor Show and named it AeroMax.

When the Romanian prince Eric Sturdza of Bank Baring Sturdza from Geneve asked for a bespoke car, he turned its attention toward Morgan. The British carmaker was already known for its passion for building cars that looked classic, but they were fitted with the latest available technology. Morgan built the car using the same underpinnings from the Aero 8 and named it AeroMax honoring Charles Morgan's son, Max. After the car was unveiled, it raised a huge interest, and the Romanian prince agreed to hand over the project and let Morgan build another hundred units, thus, celebrating the British car manufacturer's centenary.

The car's design was performed by a 21-year-old student named Matthew Humpries, who sent a design proposal to Charles Morgan, looking for a temporary job. Sir Morgan was so impressed that he hired the young student as chief of design, and the first project was the AeroMax. The car still has the same front fascia as the Aero 8, with the same headlights carried over from a Mini mounted on the long, curved front fenders that resembled the Art Deco era. But the cabin was completely different. It featured an arched roof line swept toward the back of the vehicle. The rear split window resembled some of the Talbot and Bugattis from the 30s, and it gave the car a distinct personality. At the back, the taillights were carried over from Lancia Thesis.

Inside, the carmaker installed the most exclusive materials available in its shop. Real leather and wood veneers covered the cabin. They were available in different colors, depending on customers' tastes.

Under the hood, Morgan installed the same N62 V8-mill carried over and adapted from BMW, and it was mated to a six-speed automatic transmission. 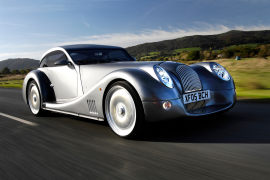