1 Snoop Dogg Introduces His Latest Car, a 1970 Buick Skylark With a Flashy Wrap

3 The History of Buick in NASCAR

The GM’s mid-level luxury brand, Buick, has experienced a company growth with the previous models, the Buick Encore and the Buick Enclave. Buick decided to produce a new crossover, the first one to sport an off-road driving mode.

It was launched on the Chinese market at first, and by 2016, the car was available in the United States, Canada and Mexico.

The Envision was powered by turbocharged 2.0-liter 4-cylinder unit mated to a 6-speed automatic transmission. The engine boasted 256 hp.

The exterior designed featured a waterfall grille, wing-style xenon headlamps and boomerang shaped LED daytime lights. At the rear, the Envision had large LED taillights and the already known curved rear glass that was seen on the Enclave and the Encore.

The interior offered a luxury styling and practical features. The heated steering wheel was all wrapped up in leather as well as the door panels and the center armrest. The standard interior color was black, however, a few colors were offered for buyers to easily customize the cabin in the desired way.

The cabin was roomy and due to a long wheelbase, the legroom was more than enough even for the rear passengers.

As the rear seats were foldable, the load area increased to 1,550 liters. 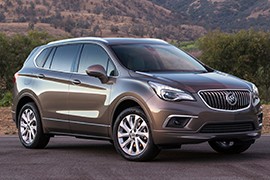