In 2008, Buick introduced a new generation of the Regal range to the North-American market.

It was primarily based on the European Opel/Vauxhall Insignia. Four years later, it refreshed the lineup.

While the European branch struggled to survive and being just a step away to be bought by the Russian bank Sberbank, the U.S. model was well received on the market. The styling and the features offered by Buick for the Regal pushed the car into the premium segment.

GM unveiled the 2014 Buick Regal at the 2013 New York Auto Show. There were essential changes to the exterior. The car featured a new bumper design with wider air-intakes on the sides, where the fog lights were installed. The rear bumper was redesigned as well, and it featured two chromed exhausts under the apron. The LED technology found its way into the rear taillights and on the daytime running lights. The three-box sedan version featured an integrated lip-spoiler on the trunk-lid.

Inside, the Regal featured few modifications to the dashboard and for the infotainment system. The new instrument cluster featured a TFT color-display placed between the tachometer and speedometer. The design team relocated the lights knob upper than before, to be easier to reach by the driver.

The most significant improvement under the hood was the introduction of the 2.4-liter with light electrification assistance that transformed the car into a mild-hybrid vehicle. For those who were looking for more performance, Buick offered the Regal with a 2.0-liter turbocharged unit mated to a 6-speed manual as standard. It provided the car with an all-wheel-drive system. GM decided to offer a 6-speed automatic for both engine versions. 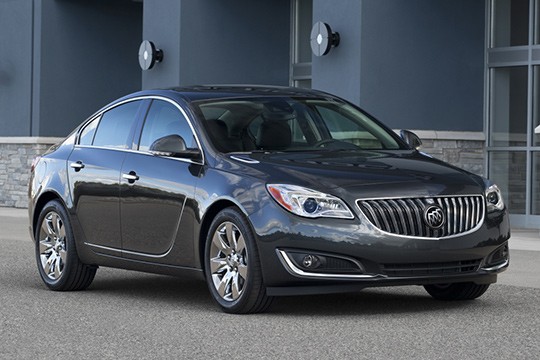